It looks like the PAP Internet Brigade has struck again 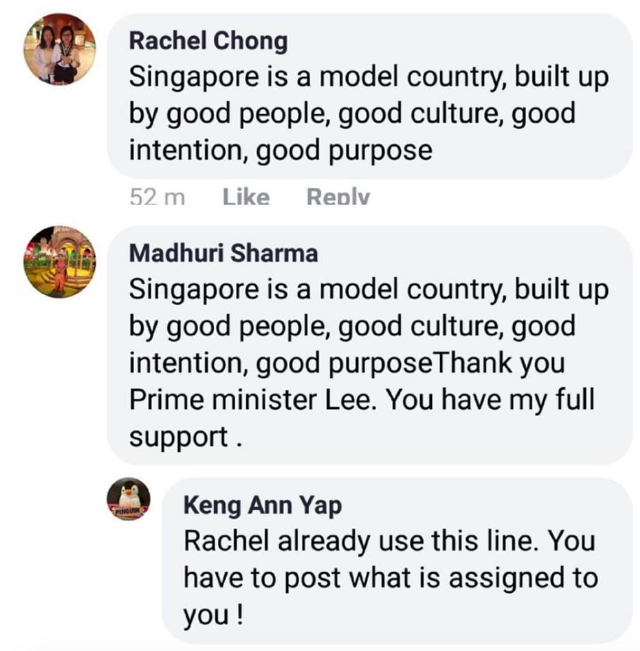 Similar to other countries around the world, Singapore also has its fair share of Internet trolls whose main job is to defensively comment on social media or other web forums.

Earlier this week, many Facebook users shared a screenshot of three Facebook comments from people whom they believe are part of the PAP IB.

The comments that were posted show one Rachel Chong who said, “Singapore is a model country, built up by good people, good culture, good intention, good purpose”.

Following her comment, someone called Madhuri Sharma added, “Singapore is a model country, built up by good people, good culture, good intention, good purposeThank you Prime Minister Lee. You have my full support.”

After these two almost identical comments, a third person, Keng Ann Yap joined the discussion and added, “Rachel already use this line. You have to post what is assigned to you !”

The screenshot of their comments was shared by netizen Ricky Loo, and it saw 662 shares and 146 reactions.

Chairman & CEO at Rafflesia Holdings Pte Ltd and the Former Chief Executive Officer and Editor-in-Chief at TODAY Mano Sabnani also shared the post and added, “I say, it looks like some young people are trained to say the “right” things. But at times, their training fails them. Then the “instructor” steps in. Correct them.”

He continued, “The trouble is these people do not seem able to think for themselves. Are they doing the country any favours? The feedback may be false and the end result an echo chamber. Genuine feedback is put down by some in this brigade. The consequences could be very negative in the end”.

In his comments, he too seems to allude to the “brigade”, adding that their work is to the detriment of genuine feedback.

One of the commenters, Keng Ann Yap shared Mr Sabnani’s post and added, “
I am an “instructor” ! “

Other than the caption, the post did not receive any comments or responses.