Dr Tan Cheng Bock’s chance meetings with ruling party politicians week after week has got the rumour mills buzzing, especially since the encounters come after Dr Tan announced his return to politics with his own opposition party.

Dr Tan, an ex-People’s Action Party (PAP) MP with a 26-year career in politics, announced earlier this month that he is planning on contesting against his former party in the next General Election, with his new opposition party called the Progress Singapore Party. Dr Tan and 11 ex-PAP cadres have applied to officially register the new party.

Dr Tan announced his return to politics on 18 Jan. On 19 Jan, a day after his announcement, he bumped into Law and Home Affairs Minister Mr K Shanmugam at the Chong Pang Hawker Centre in Yishun Ave 5.

Despite their very public differences in the past, both men were all smiles as the camera clicked a picture of them at the hawker centre. Mr Shanmugam later wrote on Facebook, in a tongue-in-cheek manner:

“Was on my usual morning walkabout yesterday, starting at 8.30am at Chong Pang hawker centre and coffee shops. Dr Tan Cheng Bock dropped in later. I greeted him. Later I came across Dr Tan again, and we took a photo. I told Dr Tan to come more often. I tell this to a lot people – good for business in Chong Pang.”

Last Friday, exactly a week after Dr Tan announced the formation of the Progress Singapore Party, Tampines GRC MP Desmond Choo bumped into Dr Tan at a food centre in his constituency.

Dr Tan wrote on Facebook that Mr Choo gave him a Chinese New Year package during their meeting on Friday: “Today breakfast at Tampines Hawker and Food centre. Met a friendly MP Desmond Choo who was on his rounds…He gave me a Chinese New year package.”

This means that two PAP MPs bumped into Dr Tan in two consecutive weeks and within 7 days of him announcing his return to politics. Singaporeans commenting on these meetings have asked whether the ruling party is nervous about facing Dr Tan at the polls: 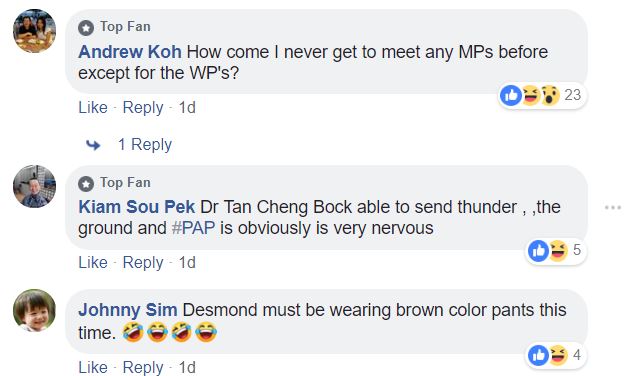 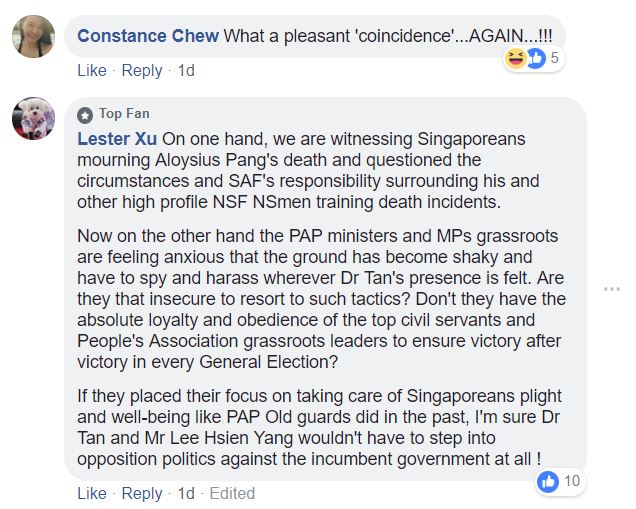