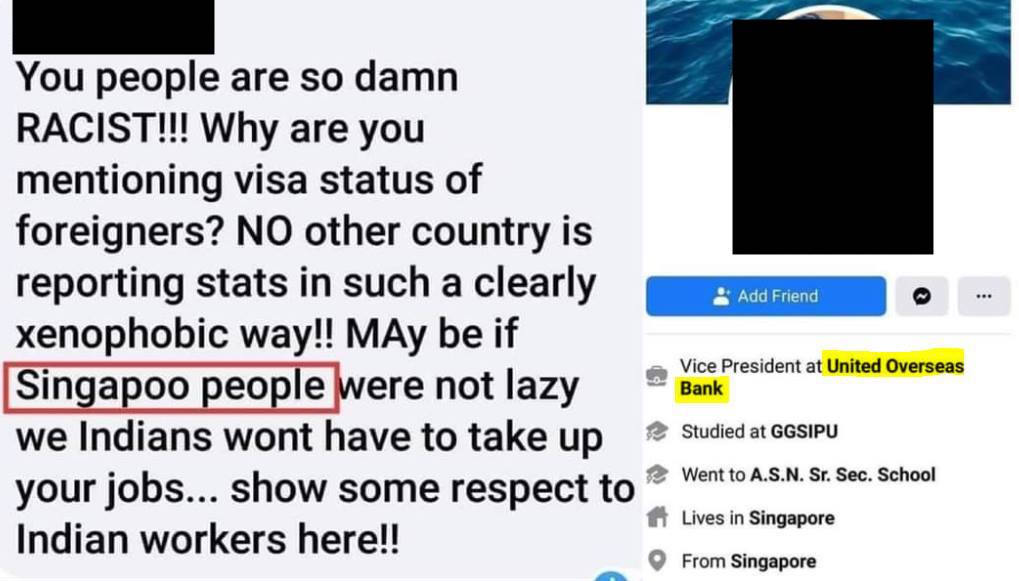 Netizens were up in arms after a Facebook user claiming to be the Vice President (VP) of United Overseas Bank (UOB) referred to Singaporeans as “Singapoo people” who were xenophobic and lazy.

The man wrote: “You people are so damn RACIST!!! Why are you mentioning visa status of foreigners? NO other country is reporting stats in such a clearly xenophobic way!!”

“May be if Singapoo people were not lazy we Indians wont (sic) have to take up your jobs”, he continued.

One of the netizens who tagged UOB was a Felix Ng. Mr Ng wrote that he found the post “disturbing” and added: “As a client of UOB and having referred clients to UOB as well, I am disturbed as to how he called Singaporeans “Singapoo”. This include (sic) you, as a Singaporean and me as well.
Its an absolute insult, a mockery of us, and a total disgrace to UOB for hiring somone (sic) like him”.

Others also commented asking UOB to look into the matter. A member of the public made a police report on the issue, calling the post a “clearly seditious act that is striving to incite unrest among the Singapore populace”. Images of the police report were also circulated online and on forum websites such as HardwareZone Forums. Shortly after, UOB posted an update on their page on the issue. They wrote: “A Facebook user “Amit Verma”, claiming to be a UOB employee, has been posting inflammatory and provocative comments on social media. There is no such employee at UOB and we do not tolerate such behaviour.
We have reported this to Facebook and the Singapore Police Force who are investigating the matter.
We respectfully ask that you not be drawn into anti-social comments or repost content that divides us.”

UOB also responded to Mr Ng’s post and said that the man is, in fact, not an employee. They added that the user has been reported to Facebook. At the time of writing, the account of the netizen claiming to be a VP of UOB had been deleted. /TISGFollow us on Social Media