Home News "If you don't like us, go home!" - Locals blast foreigner who...

“If you don’t like us, go home!” – Locals blast foreigner who says Singaporeans keep complaining about foreigners

Facebook user Lonen Bellamy posted a rather mysterious photo on the group page of COMPLAINT SINGAPORE, which had the caption, “Quit complaining about us, Singaporeans. We got children to feed too. Maybe try speaking better English, yeah?”

The photo was that of a Caucasian adolescent girl with what looked like a piece of birthday cake in front of her, with a middle-aged woman in the background.

Naturally, netizens were puzzled, since the purpose of the post was unclear:

Other netizens tried to make sense of what Mr. Bellamy had said, and to answer him accordingly:

Still others pointed out that it made no sense for Mr. Bellamy to post about complaining Singaporeans on a Facebook page called COMPLAINT SINGAPORE:

Others reminded him that he’s a guest in Singapore, and therefore must be careful of how he acts:

It did not take very long for other netizens to look up Mr. Bellamy’s past behavior online and to show other things he has posted: 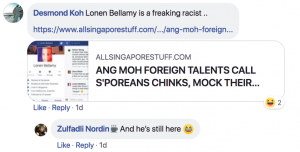 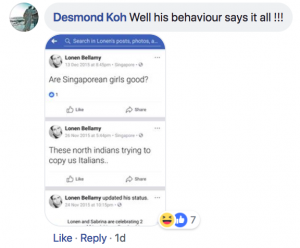 After a while Mr. Bellamy did answer his commenters, although in a mocking manner:

Which prompted netizens to ask why he’s still here, and to tell him that Singapore is not his home: 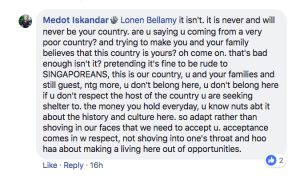 Finally, many commenters just told Mr. Bellamy that if he’s so dissatisfied with Singaporean complaints, he should just go home: