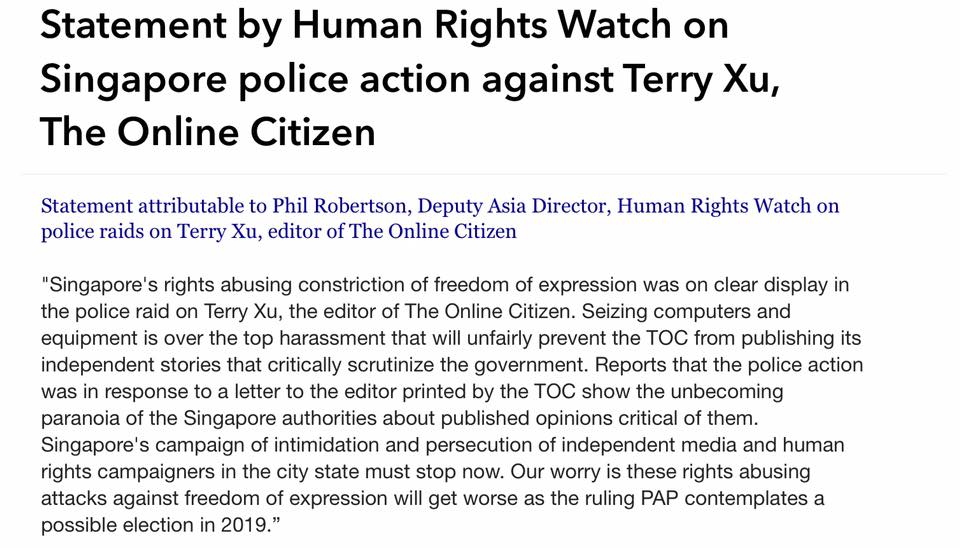 Calling the police raid on Xu a clear example of “Singapore’s rights abusing constriction of freedom of expression,” Robertson called the confiscation of TOC’s computers and equipment “over the top harassment that will unfairly prevent the TOC from publishing ts independent stories that critically scrutinize the government.”

Robertson further said that the letter that triggered the authorities’ response “show the unbecoming paranoia of the Singapore authorities about published opinions critical of them.”

Appealing for the authorities to stop their “intimidation and persecution” of independent media and activists, Robertson said that his organisation worries that the Government may ramp up actions against freedom of expression in the run-up to a possible 2019 General Election:

“Singapore’s campaign of intimidation and persecution of independent media and human rights campaigners in the city state must stop now. Our worry is these rights abusing attacks against freedom of expression will get worse as the ruling PAP contemplates a possible election in 2019.”

Earlier, TOC revealed on Facebook that the Singapore Police Force (SPF) is investigating the editor of the website over an alleged offence of criminal defamation. The website added that all electronic equipment used for the purpose of the website have been seized by the SPF: