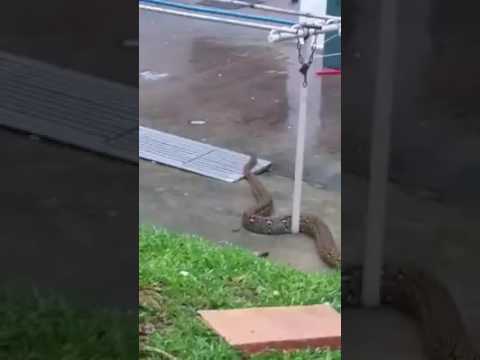 The appearance of a huge python at Boon Lay Avenue has caused much alarm. Facebook user Ghani Yassin shared the video yesterday (5 March) and said that the snake was found near Block 187 and that it looked hungry.

The increased presence of snakes in residential areas has been blamed on the reptile’s loss of habitat, as well as on the indiscriminate dumping of food waste and litter which attracts rats. Pythons feed on rats and other small animals.

Chinese newspaper Wanbao flagged Boon Lay, along with Ang Mo Kio and Orchard Road, as being the 3 areas (other than Bukit Batok) with the highest number of rat infestation.

A seven metre-long snake created a furore among residents of Boon Lay in 2011. Residents who spotted the snake around the Block 174 area said that they were worried as there were little kids in the neighbourhood.

The residents said that they believed that the snake was attracted by rats in the area and expressed concern that rat infestations will attract more snakes.