Holi 2021: Priyanka Chopra’s celebration with Nick Jonas, in-laws was all about flowers, colours and giant pichkaris 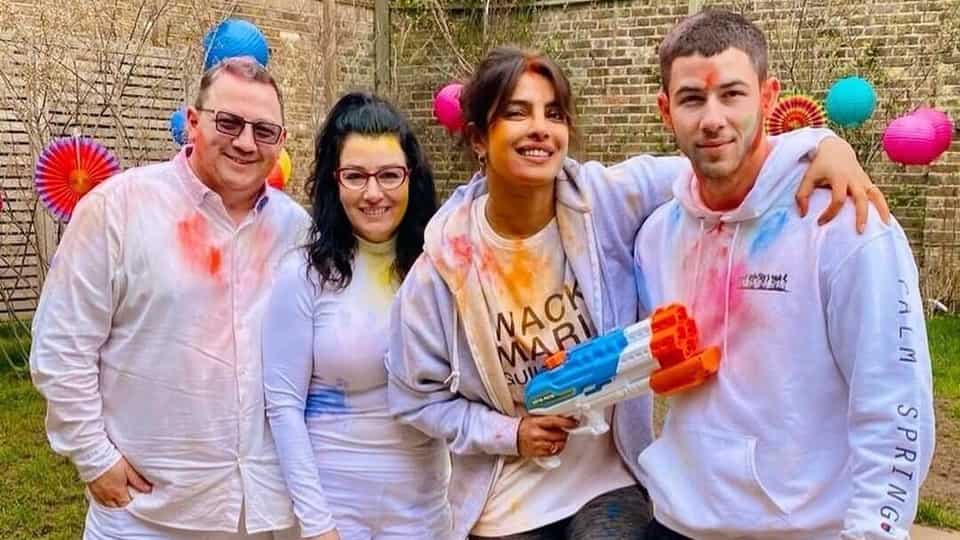 India, March 29 — Priyanka Chopra opted for a low-key Holi celebration this year, with her husband Nick Jonas, father-in-law Paul Kevin Jonas Sr, and mother-in-law Denise Miller-Jonas, in London. She took to Instagram to share photos of the celebration, along with an important reminder to her fans — to stay indoors.

In the first photo, Priyanka, Nick and her in-laws were seen posing in white outfits, with splashes of colours on them. She had a giant pichkari in her right hand. The other pictures were that of flowers and coloured powder. “Holi, the festival of colours is one of my favourites. Hope we can all celebrate it with our loved ones, but in our HOMES! #HappyHoli everyone,” she wrote in her caption, followed by a heart emoji.

Nick, meanwhile, shared the same set of pictures on his own Instagram page and wrote, “Happy Holi! From our family to yours! #holi.”

Priyanka and Nick’s intimate celebration is a departure from last year,, where they flew down to Mumbai, and attended the Holi bash hosted by Isha Ambani. The party was attended by a host of Bollywood celebrities, including Vicky Kaushal, Katrina Kaif, Jacqueline Fernandez, Rajkummar Rao and Huma Qureshi.

Last week, Priyanka saw the opening of her Indian restaurant in New York, Sona. However, she could not be there in person, as she is in London for professional commitments.

In an Instagram post, Priyanka said that the project started out as a ‘simple craving for great Indian food’ and credited Nick for coming up with the ‘perfect name’. “Hubby came up with the name at an early tasting with the team, as Sona means ‘gold,’ and he had heard that word in India, well…A LOT, throughout our wedding!” she wrote, along with a laughing emoji.

Priyanka also said that she was gutted about not being able to make it to the opening day of Sona. “I’m devastated I’m not there to celebrate, but I’m definitely there in heart and spirit…and on FaceTime,” she wrote.Follow us on Social Media