Mr Lee spoke about the looming general election while Mr Heng made remarks about his recent parliamentary motion against the Workers’ Party and the impending GST hike. Mr Chan declared that the Government takes a “serious view” of falsehoods about the India-Singapore Comprehensive Economic Cooperation Agreement (CECA), that recently drew intense public concern.

Mdm Ho published four articles covering comments made by DPM Heng, who is widely expected to succeed her husband as head of government after the next election: 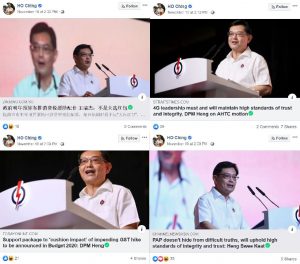 She published the most number of posts linking to articles covering her husband’s comments. Out of the seven posts covering PM Lee’s most recent remarks at the PAP convention this weekend, two posts were repeat links to articles she had already shared: News that the EBRC was convened in August has led to fevered speculation on when the next election will be called. Political observers and members of the public seem to agree the election could be held as soon as December 2019 or timed to take place in the first quarter of 2020, after the next Budget.Follow us on Social Media