Some netizens said that their comments had been hidden from Ms Gan Siow Huang’s Facebook feed, however, after some time, these comments emerged again.

Netizens found it ironic that some of the comments temporarily disappeared from a post where Ms Gan, Minister of State in the Ministry for Education and Ministry for Manpower, said there should be a “space for open and respectful conversations without fear of being cyberbullied”.

Ms Gan in her post shared a line to a controversial article published in TODAY on Mar 14. The piece, written by Ms Dana Teoh, is entitled, Gen Y Speaks: This is why I don’t want to be woke. Don’t cancel me for it.

Ms Teoh is a student of former Straits Times editor turned NUS journalism professor Bertha Henson. The piece was submitted as an assignment in one of Prof Henson’s classes, and she selected it as one of the best and endorsed it for publication.

The professor had written, “I thought Dana’s was the best. She has a style of writing that stands out among the class – and from most Gen Y Speaks pieces we have critiqued.”

However, some critics found Ms Teoh’s article to be transphobic, and expressed concern over the LGBTQ community.

Prof Henson later admitted in a Facebook post that she could have edited “an insensitive phrase” from Ms Teoh’s piece.

But the article found both detractors and defenders, and among those to defend Ms Teoh was Ms Gan. The minister wrote, “I respect Ms Dana Teoh for speaking up on woke. There should be space for open and respectful conversations without fear of being cyberbullied. Only then can we build deeper understanding of issues and stay united as a nation.”

But when people left certain comments on Ms Gan’s post, some were said to have disappeared, however temporarily. 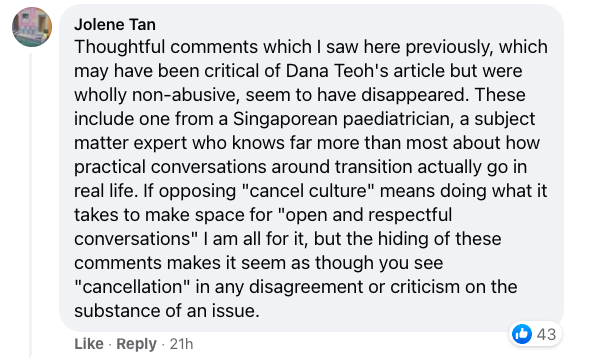 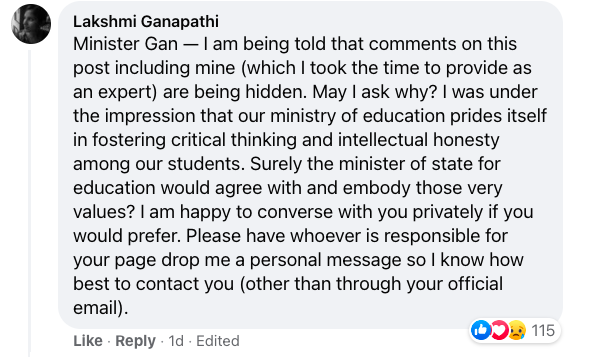 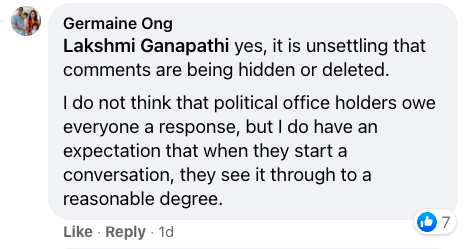 But the comments appeared again later on.

As it turns out, the comments had not been deleted, but Facebook’s “Hide comment” function had been used.

And comments that have been hidden can be unhidden.

One netizen wondered if the hiding of comments had been done by an overzealous staff member of Ms Gan who functions as the administrator of her social media page.

Some netizens found humour in the comments disappearing and then coming back, with one saying it was “So exciting like avengers endgame,” referencing the Marvel movie when superheroes who had disappeared came back.