The Independent News
Home News SG Economy GRACE FU: How I get my good results in school

GRACE FU: How I get my good results in school 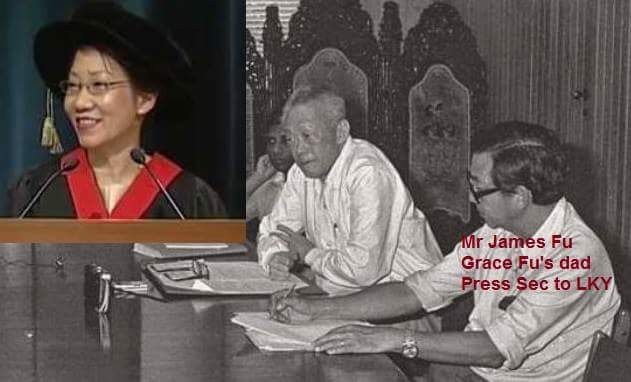 Yesterday night (13 Jan), Grace Fu put up another Facebook posting, explaining to people how she got her good results while studying in school: https://www.facebook.com/gracefu.hy/posts/1220479584694781

She listed 4 points:
o “My Grandfather helped me with my Mother Tongue”
o “I slept less often in class”
o “I bucked up and played less computer games”
o “I failed my first term badly and that was a wake-up call”

She might have given the impression to the kids that by studying well, one can easily become a million dollar minister.

She actually forgot to mention that she is the daughter of James Fu who was the press secretary to LKY from 1972 to 1993. Indeed, she was already part of the PAP’s elite family or “natural aristocracy” at a very young age, with her father having direct access to LKY. Being part of the most powerful elite network in Singapore would certainly help Ms Fu to be exposed to the top brass in PAP more easily.

Incidentally, her father James Fu, even though just a civil servant, did many good deeds for PAP, a political party. For example, in the book, ‘OB Markers: My Straits Times Story’ written by former SPH Editor-in-Chief Cheong Yip Seng, he revealed that during 1984 GE, it was Ms Fu’s father who had pressured SPH to publish opposition member Chiam See Tong’s O-Level results in the newspapers, thus infringing on Mr Chiam’s privacy.

Chiam’s unimpressive O-Level results with respect to then PAP candidate Mah Bow Tan’s was eventually published in Singapore newspapers. LKY must have been quite pleased with Ms Fu’s father then for helping PAP.

Republished from the Facebook page ‘We want Grace Fu to Resign’.