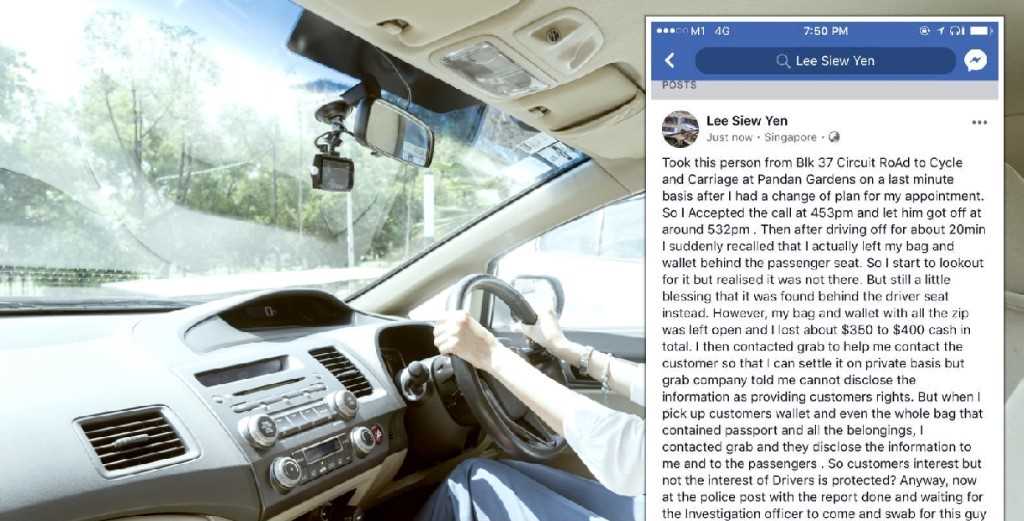 A Grab driver, Lee Siew Yen, has alleged that one of her customers pilfered between $350-$400 from her handbag that she had accidentally left in the backseat of her vehicle while she was ferrying the passenger.

The driver immediately contacted Grab but was allegedly told that the company could not disclose customers’ personal information to drivers. Lee found that this was a double standard since there were times when Grab has disclosed personal information when she needed to return items left behind in her vehicle to the rightful owners.

Lee subsequently lodged a police report and shared the matter on Facebook. She wrote:

“Took this person from Blk 37 Circuit Road to Cycle and Carriage at Pandan Gardens on a last minute basis after I had a change of plan for my appointment. So I Accepted the call at 453pm and let him got off at around 532pm.

“Then after driving off for about 20min I suddenly recalled that I actually left my bag and wallet behind the passenger seat. So I start to lookout for it but realised it was not there. But still a little blessing that it was found behind the driver seat instead. However, my bag and wallet with all the zip was left open and I lost about $350 to $400 cash in total.

“I then contacted grab to help me contact the customer so that I can settle it on private basis but grab company told me cannot disclose the information as providing customers rights. But when I pick up customers wallet and even the whole bag that contained passport and all the belongings, I contacted grab and they disclose the information to me and to the passengers. So customers interest but not the interest of Drivers is protected?

“Anyway, now at the police post with the report done and waiting for the Investigation officer to come and swab for this guy fingerprint. Good luck to you Mr S*****d Ali. This is Singapore. Even though I might be careless but does not mean you can escape either. Don’t underestimate the police!”