Home News GDP is an antiquated measure of our wealth – so why does...

GDP is an antiquated measure of our wealth – so why does the PAP constantly refer to it?

For all its uses, the GDP is an antiquated measure of a country’s development. It measures the economy’s size in terms of goods and services produced by the active workforce. Yet the GDP conceals income inequality and therefore, conceals the plight of the urban poor.

For states with high income inequality such as Singapore, with ministerial wages of more than $55,000 a month whilst blue collar workers scrape by with less than $2000, the GDP paints an overly upbeat picture that can be disingenuous. Placing too much focus on GDP figures can be dangerous.

One of our guiding principles is “a stake for everyone, opportunities for all” and GDP as a sole benchmark for our economy negates that. Is our guiding principle more of a feel-good soundbite parlayed into the national curriculum for the sake of indoctrination? Or to immortalize a bygone golden era? Surely our claims to fame cannot just be GDP figures and STB-sponsored Hollywood movies?

Development organizations found that beyond wealth accounting, the GDP does not provide a comprehensive and holistic understanding of the country. Other equally important aspects are government effectiveness, voice and accountability – failing which there will be complacency and misgovernance.

So keen were these organizations in rectifying the lack of the GDP, that the UN developed the Human Development Index (HDI), studying literacy and life expectancy rates alongside the GDP.

Further, the Gini Coefficient, which measures income inequality within society, was later incorporated into development studies, further reflecting shortfalls of the GDP. Singapore’s inequality is off the charts, second only to a developing-country, Chile. 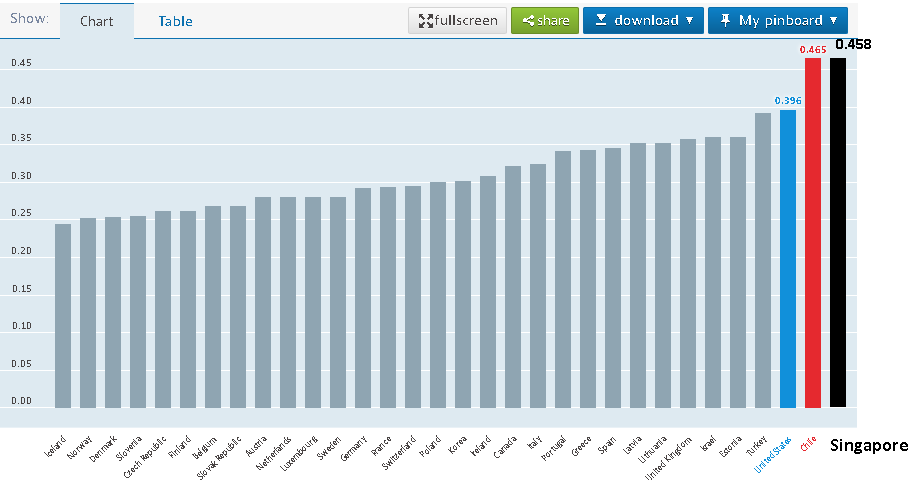 Developed and progressive countries that are fully committed to the overall wellbeing of society, have put the urban poor in the forefront, proffering strategies for broad-based growth. In the well-quoted example of Norway, oil revenues that have topped USD$1 trillion were ploughed back into salient investments overseas. The government has set aside USD$200,000 each for 5.3 million of its citizens, marking the subtle transition to inclusive growth, by means of capitalistic gains.

In Singapore, a cursory search online yields heart-wrenching stories of poverty in the midst of abundance.

The co-founder of a social enterprise Mrs. Ang said that poverty is often tricky as “state agencies don’t always know the reality of the ground”, yet shouldn’t this be within the government’s purview and jobscope?

Clearly, a measure of our economy’s health based on GDP growth alone is unsustainable.

Which brings us to the question – why does the government insist on referring to the GDP?

For all its shortfalls, the GDP does have its merits – it provides for convenient international ranking, showing us statistics over the years, providing insights into the health of our economy.

On its own, the GDP is an objective measure and a scientific calculation undeniably grounded in time and space. But in application, GDP can inadvertently be turned into a political tool. A PR mouthpiece for a country’s leaders; or even as a reminder of a quid pro quo deal, for those who have benefitted from the system.

In recent years, the government has taken to trumpeting the high GDP growth rate as a KPI of sorts – in “exceptional years” ministers are entitled to the AVC (ranking from 0-1.5 months), which is on top of their fixed Non-pensionable Annual Allowance of a 13th-month bonus. Whilst one should be rewarded for work, arguably, public servants can do better than to “work for reward”.

Currently, the government is considering adding “quality of life”, a social indicator to represent citizens’ life satisfaction, but have not been able to quantify such an “intangible and multi-faceted concept”. If concretised, such an indicator can act as a social leveller.

In conclusion, only time will tell whether our economy, with an aging population, can maintain the growth momentum. More importantly, how can benefits be expanded to benefit beyond the elites? Does a growth in GDP mean anything for the common Singaporean? Should we be taking a page out of our equally developed yet more progressive counterparts? Structural transformation must be had in order to strengthen the fragile lower-income strata of society.Follow us on Social Media