The Independent Singapore News
Home News Former owner of a dog laments about it being put to sleep...

A Facebook user posted news yesterday about a dog that he had given up for adoption.

Loki, a soon-to-be 3 year old puppy, had been re-homed 2.5 years ago. Mr Theng, its former owner had received the news on May 6 that Loki had been put down. According to Mr Theng, Loki was a perfectly healthy dog but he was told that the dog had bitten a girl and the new owners were worried as the couple had just had a baby. The owners also told Mr Theng that they tried re-homing Loki but were unsuccessful.

Mr Theng questioned the couple’s commitment when adopting the dog in the first place, asking why had they not engaged a dog trainer in the past nine months or return Loki to them so that they could find him a new home.

He also used his post to apologise to Loki for handing him over to the wrong home, ending his post with a message to the couple saying that one day when their child asks for a pet dog, they will remember Loki and should never get one.

Netizens were outraged with the treatment of the dog, some questioning the ethics of the veterinarians involved in the process.

Back in Oct 2013, there was a similar case of an adopted dog being euthanized for being aggressive to its owners. The Agri-Food & Veterinary Authority of Singapore stepped in to issue a clarification of euthanasia guidelines for vets after a public outcry back then. 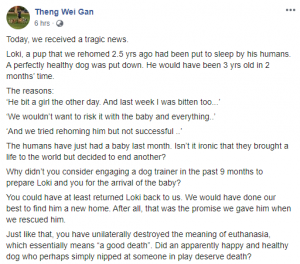 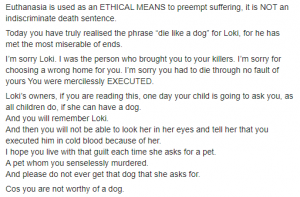