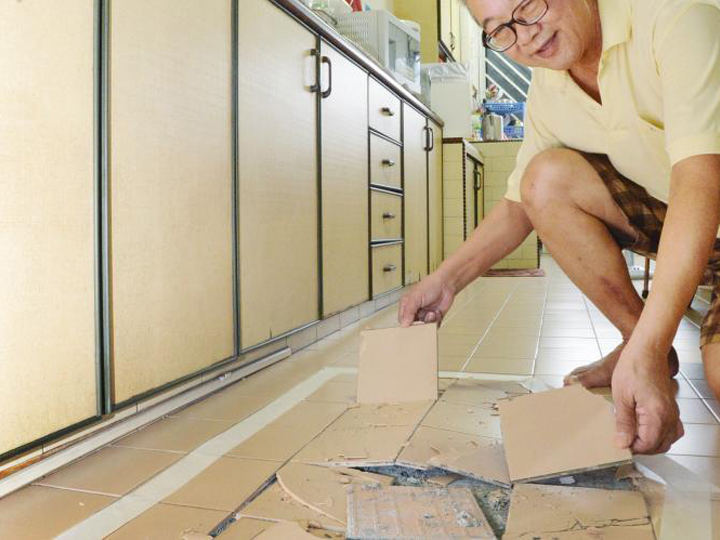 65-year-old retiree Mr Tan was about to head to bed after lounging on the sofa in his living room, last Friday around 9pm, when he heard sounds of an “explosion” coming from his kitchen.

Rushing to investigate, Mr Tan discovered that the floor tiles in his kitchen had cracked for no apparent reason. The force of the cracking apparently even sent some pieces of the tiles to fly to his living room area.

The elderly homeowner, who has lived at his HDB flat on the 12th floor of 526 Hougang Ave 6 for the past 30 years, told the Chinese daily:

“I thought something dropped on the floor. When I went to the kitchen and turned on the light, I saw that the tiles had cracked. Some of the broken tiles had even ‘flown’ to the dining table and living room area.

“I hope that the relevant agency will pay attention to quality when it installs selects materials to be used. Lucky no one was hurt!”

Adding that all his tiles were original fittings. Mr Tan revealed that he has covered up the cracked floor area until renovations can be completed:

“I have left the renovation to my children. When I saw news on floor tiles ‘exploding’ I never thought it would happen to me too.”

Just over a week ago, another elderly homeowner in Serangoon was shocked to see the floor tiles in his home cracking suddenly for no apparent reason.

The 67-year-old part-time taxi driver, Mr Teo, was shocked to hear explosive, firecracker-like sounds erupting from his bedroom on 7 October.

The sounds were so loud that he though that an earthquake had hit his home, before discovering that the sounds were caused by the floor tiles in his bedroom that somehow dislodged from the floor and cracked into several pieces. He claims to have seen the tiles dislodging with his own two eyes.

“I estimate that I’ll need to spend S$5000 on repairs. But I’m only a part-time taxi driver and I don’t earn much while my wife is a housewife. We’re worried that we won’t be able to afford the repairs. At this point of time, no choice we’ll have to cover the cracks with a carpet and hope no more tiles start ‘exploding.’”

https://theindependent.sg.sg/hdb-units-floor-tiles-explode-with-firecracker-like-sound-elderly-homeowner-cant-afford-5000-to-repair-broken-tiles/Follow us on Social Media