After returning to the shore, members of the press caught Mr Nurhidayat raising Mr Casugay’s hand in victory, although he had lost the championship.

But it is for the best reason possible—rescuing the life of Indonesian opponent Arhip Nurhidayat on Friday, December 6.

At the Monalisa Point in San Juan, La Union, where the surfing events are held, Mr Casugay had been poised to win the gold but saw Mr Nurhidayat losing his board, falling into the rolling waves.

Two other local surfers stepped in to help the competitors get back to safety.

The Filipino surfer’s sacrifice was caught on camera by netizen Jefferson Ganuelas, who posted it at 12:29 pm Manila time the same day.

He wrote, “The #seagames2019 surfing is on hold. Indonesian longboard sensation @mencosss broke his leash and (was) swept away and being pounded by triple overhead bomb waves at Monaliza Pt. Local surfer @roger_casugay rescued him not minding the ongoing race for a gold medal. #pilipinoheart is soooo goood!!! One of the best. @mylifeonboard #seagames2019”

After returning to the shore, members of the press caught Mr Nurhidayat raising Mr Casugay’s hand in victory, although he had lost the championship.

The organisers had postponed the event the two surfers were competing in three times because of Typhoon Kammuri, which entered the Philippine Area of Responsibility last week.

According to the 2019 SEA Games official account, the #seagames2019 surfing is on hold. It also described the heroic act by the Filipino surfer.

Before the incident, Rogelio Esquivel, another Filipino surfer, bested Dean Permana of Indonesia by scoring 17.35 against Mr Permana’s 10.50 in the longboard tournament’s first match.

Mr Casugay is congratulated and hailed as a hero by his fellow Filipinos. The Philippine Sports Commission tweeted, “#SEAGames2019: For a champion is known not only with the medals they reap but also with the heart that shows their golden spirit!

Casugay personified this truth when he gave up his lead in the gold medal race to save opponent, Arip Nurhidayat of Indonesia.

Despite missing out on that golden finish, he became the champion of many with the sacrifice a brother in the sport. He truly showed the heart of a champion. A Filipino Champion!” 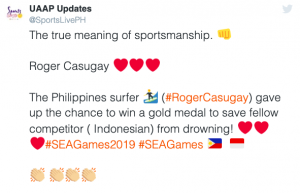 Even Indonesians saluted the Filipino surfer:

Read related: Behind the scenes at SEA Games 2019: From not enough food to “too good to resist”

Behind the scenes at SEA Games 2019: From not enough food to “too good to resist”