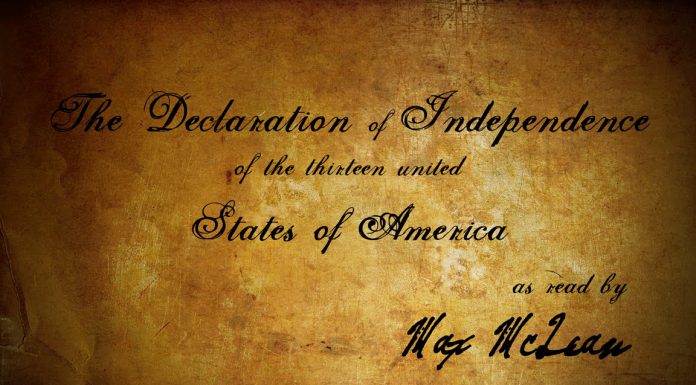 A small community newspaper in Texas was briefly accused of violating Facebook’s policies against hate speech – and their ‘crime’ was posting America’s founding document on the social media site.

The Liberty County Vindicator of Liberty County, Texas, has been sharing daily excerpts from the declaration in the run up to July Fourth. The idea was to encourage historical literacy among the Vindicator’s readers.

But part 10 of its post did not appear wrote Vindicator managing editor Casey Stinnett. The Vindicator instead received a notice from Facebook saying that the post ‘goes against our standards on hate speech.'”

“He has abdicated Government here, by declaring us out of his Protection and waging War against us.

He has plundered our seas, ravaged our Coasts, burnt our towns, and destroyed the lives of our people.

He is at this time transporting large Armies of foreign Mercenaries to compleat the works of death, desolation and tyranny, already begun with circumstances of Cruelty & perfidy scarcely paralleled in the most barbarous ages, and totally unworthy the Head of a civilized nation.

He has constrained our fellow Citizens taken Captive on the high Seas to bear Arms against their Country, to become the executioners of their friends and Brethren, or to fall themselves by their Hands.

He has excited domestic insurrections amongst us, and has endeavoured to bring on the inhabitants of our frontiers, the merciless Indian Savages, whose known rule of warfare, is an undistinguished destruction of all ages, sexes and conditions.”

Stinnett suspects the term “Indian Savages” might have triggered Facebook’s “filtering program.” He said the censorship was an “automated action.”

He added: “This is frustrating, but your editor is a historian, and to enjoy the study of history a person must love irony. It is a very great irony that the words of Thomas Jefferson should now be censored in America.”

“It looks like we made a mistake and removed something you posted on Facebook that didn’t go against our Community Standards. We want to apologize and let you know that we’ve restored your content and removed any blocks on your account related to this incorrect action.”Follow us on Social Media