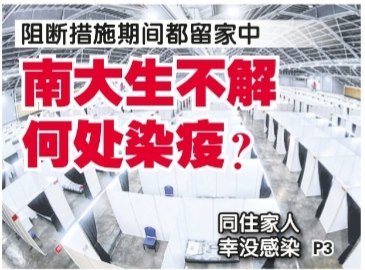 In an open letter published in today’s (May 13) Lianhe Wanbao, Han Yong May, Editor of NewsHub, SPH Chinese Media Group responded to allegations made by an NTU student accusing a Zaobao/Wanbao reporter of fabricating an interview.

Lianhe Wanbao published an article on May 7, titled “NTU Student perplexed at how he contracted COVID virus despite not having left the house during circuit breaker period”. The content of the article was later refuted by Mr Quah Zheng Jie, the subject of the article, in his social media post.

In her open letter, Ms Han clarified some accusations that Mr Quah made in his Facebook note.

She explained that when Mr Quah turned down the journalist James’ request to be interviewed, “Notwithstanding the unwillingness of Mr Quah to be interviewed, our reporter used the wrong method to report on the story, by framing the article as an interview when it was actually written based on Mr Quah’s IG posts and his personal understanding of Mr Quah”.

She also added that the reporter did not inform his immediate supervisor that he did not obtain Mr Quah’s consent for the interview.

“As Mr Quah had declined to be interviewed, the reporter could still have written the article, making reference to the facts publicly available, e.g. public social media posts, but should not portray it as an interview piece”, Ms Han wrote.

Additionally, Ms Han also clarified that the article “in fact ran on Lianhe Wanbao and not Lianhe Zaobao. In addition, the story was not fabricated. The details were based on extracts from Mr Quah’s social media posts”.

She added that they have set up an independent disciplinary committee to review the case, and apologised to Mr Quah, “as we should not have attributed the story we ran to an interview with him when he expressly declined the interview request”.

The full letter can be read here. /TISG