Driver rams into parked cars in order to escape police 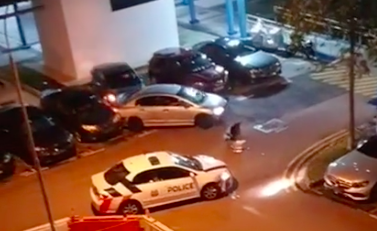 An alleged drunk-driver was caught on camera ramming into a row of parked cars in order to flee from the police.

In a video widely shared on WhatsApp messenger, the silver car can be seen in a HDB parking lot. A police car was partially blocking the road, leaving most cars unable to pass through.

In an attempt to presumably flee from the police, the driver of the silver car reversed through the narrow gap, ramming into a row of parked cars in the process. He then turned and quickly made his way out.

Unfortunately for the driver, in the process of the accident, the front bumper and license plate completely detached, falling in front of the police car.

The video was also shared on popular Facebook pages such as ROADS.sg and Beh Chia Lor. It was originally uploaded to TikTok by @user903971431

While it is unclear if the driver of the silver car had caused the damage, the police car also seemed to have its front bonnet either open or damaged.

For obstructing the course of justice, the driver can be jailed for seven years and fined.

He could also be jailed for up to six months and fined up to S$2,500 for causing a rash act endangering human life.