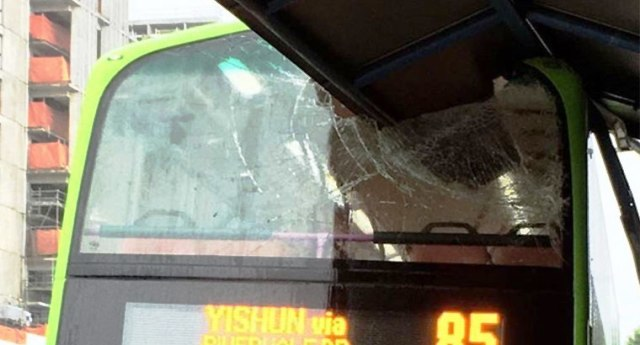 Twitter user 1man shared a video of bus number 85 which crashed into the shelter roof of a bus-stop in Yishun. No one was injured in the accident which happened this afternoon at about 1.10pm.

THE BUS DRIVER DROVE INTO THE SHELTER WTF #Yishun pic.twitter.com/yoFCKrMq7c

The front of the upper deck of the Go-Ahead bus looked damaged. Go-Ahead said that it was investigating the accident which happened at the bus stop outside Yishun MRT station. It added that its staff were deployed to the scene to check on commuters and that services on the route were unaffected.

This is the second time such an accident has happened in recent months. In April, an SBS double-decker bus crashed into the roof of a taxi stand shelter at Bishan MRT Station.