The Independent News
Home News Featured News Did or did not Law Minister say "You are not going to... 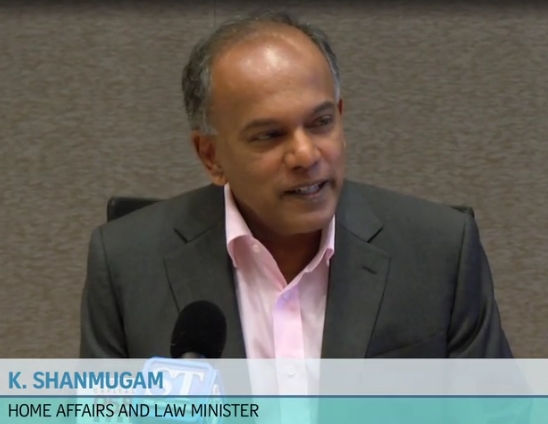 The Law and Home Affairs Minister, K Shanmugam, spoke to the mainstream media earlier today on the the investigation of the General Manager of Ang Mo Kio Town Council (AMKTC) by the Corrupt Practices Investigation Bureau (CPIB).

The General Manager was flagged for “the way he handles contracts and dealings in the town council”. The manager, Mr Victor Wong, is employed by CPG Facilities Management, but is also the secretary for the town council.  He has been put on forced leave.

No further details were given about the possible rot at a town council anchored by Prime Minister Lee Hsien Loong. But Member of Parliament Ang Hin Kee, the town council’s chairman, said the complaint “arose out of (Wong’s) dealings which relates to probable behaviour needing investigation done by CPIB”.

In the Government’s first public comments on the investigations into the corruption probe, Mr Shanmugam said that once an allegation is made, no one will be spared from investigation.

In his impromptu comments given on the sidelines of an announcement made on the review of investigation processes for young persons, the Minister also promised that “nothing will be swept under the carpet.”

The mainstream media however seems to have ‘swept under the carpet’ a remark allegedly made by the Minister on the topic.

A write-up by Today had earlier reported:

“The system has to be clean, stressed Mr Shanmugam. “You’re not going to get angels in power all the time,” he said. Instead of hiding “every step of the way”, the way to handle things was to be upfront, disclose all information, and let the law take its course, he added.”

This remark, allegedly made by Mr Shanmugam, is now missing from the report by the newspaper.

Today’s article was first published this morning at 11.57am and was updated at 1.55pm.

But Today is not the only mainstream paper which reported the Minister to have made that comment. The Straits Times (ST) also did.

A Google search shows that ST quoted the Minister as saying “You are not going to get angels in power all the time,” in its Facebook.

That quote seems to have been unpublished in the newspaper’s Facebook page.

In his comments on the topic, Mr Shanmugam contrasted the approach AMKTC took with an allegedly corrupt General Manager with the then-Aljunied-Hougang-Punggol East Town Council, which has been under scrutiny for its relationship between its former managing agent FM Solutions and Services (FMSS) and Essential Maintenance Service Unit (EMSU) contractor FM Solutions and Integrated Services (FMSI).