Comfort DelGro has sacked a taxi driver after he was discovered to have overcharged a passenger. The taxi services operator noted that this was not the driver’s first time overcharging a customer.

The firing of the taxi driver came after Facebook user Joyce K. Lee shared a photo of her taxi receipt in popular Facebook group ‘Singapore Taxi Driver’. Sharing that the receipt is from a trip she took from Changi Airport to Sungei Tengah, Lee asked members of the group whether the $70.75 she was charged is a typical fare for such a trip. 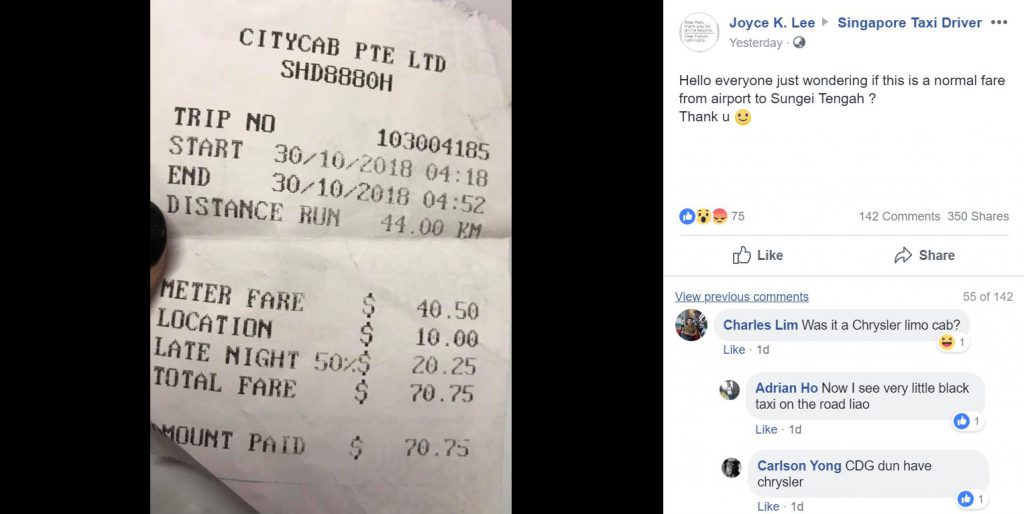 Netizens were quick to warn Lee that she may have been scammed, since such a trip should typically not cost more than $50, inclusive of a $3-5 location surcharge:

“We would like to apologise to Ms Lee for the fares that were wrongfully charged to her worker. We have investigated and found the driver guilty of overcharging.”

“As this was not his first offence, we have decided to terminate his hiring agreement. Such behaviour is unacceptable.

“We hope that Ms Lee could get in touch with our Customer Service Centre at feedback@cdgtaxi.com.sg with contact details so that we can follow up with service recovery.”