Singapore—A serious vehicular accident occurred on Sunday (May 10) between a motorcycle and a car, resulting in the motorbike rider being rushed to the hospital immediately afterward. The incident occurred at Sengkang.

The rider is a driver for GrabFood, based on a post on the Facebook page SG Road Vigilante – SGRV, which posted the photos of the accidents as well as the license plates of both vehicles, FBK6845H for the motorcycle and SLV2163S for the other vehicle, a black Mazda phv (Private Hire Vehicle). The photos showed that the car, which landed on the sidewalk, sustained what looked like a considerable impact to the left side of the front of the vehicle, while pieces of the motorcycle were scattered on the road.

Other photos showed the car’s windshield with a large crack on the left side, crowds gathering at the scene of the incident, as well as an ambulance and officials. On Instagram, a netizen also posted a photo of the bike featuring its license plate, with a caption that said, “guys anyone got contact for this rider please inform the family asap.” But the father of the driver later commented on the post, asking for a video that had shown the accident to be removed, which SG Road Vigilante promptly did. In another comment, the father said his son was in stable condition and would undergo surgery the following day.

Netizens replied to his comment, speaking their wishes for the son’s recovery.

Some netizens on the SG Road Vigilante post commented that the impact of the collision must have been considerable.

Many others wished the driver a speedy recovery. 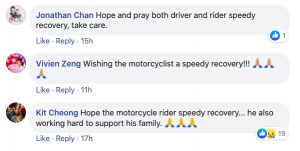 One netizen urged against finger-pointing and assigning blame to either driver and encouraged others to wish them both a swift return to health.

A few others wrote that this particular junction is accident-prone, and reminded motorists to drive carefully in this area.

Maybe since people are more dependent on food delivery riders during this circuit breaker than ever, people commenting expressed their concern and asked the drivers to take care of themselves.

Another netizen appealed to the public to exercise patience with food delivery riders.