Members of the LGBTQ+ community have since rallied on the social media platform to call out what they see as a form of “conversion therapy,” a widely discredited pseudoscience devoted to changing sexual orientation 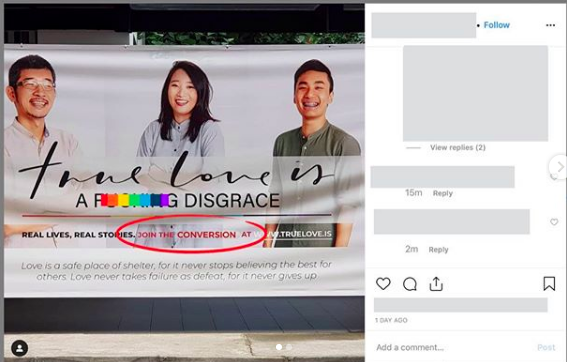 The Christian group behind the Instagram account TrueLove.Is.Sg faced a huge wave of criticism and backlash from the local LGBTQ community after it touted itself as trying to “help Christians with unwanted same-sex attraction”.

The group is linked to the 3:16 church led by Pastor Ian Toh.

The account also captions their post with things such as,” “I was introduced to a church which believed that homosexuality is no longer a sin. But I knew it was a lie and I wanted to stay in that lie”, and ““I no longer identify myself as gay…The truth set me free.”

Members of the LGBTQ+ community have since rallied on the social media platform to call out what they see as a form of “conversion therapy,” a widely discredited pseudoscience devoted to changing sexual orientation.

Yesterday, TrueLove.Is.Sg shared the photo of their banner and wrote, “There have been deliberate efforts to spread online falsehoods that TrueLove.is practices so-called “conversion therapy”. Many have shared this post of a photoshopped image that is false. Swipe for original artwork printed.

TrueLove.Is does not practice “conversion therapy” nor does it condone “electroshock therapy”. The ministry provides Christian stories, resources and a safe community to help Christians with unwanted same-sex attraction.

We appreciate the support that has been forthcoming and continue to encourage Christians everywhere to engage in conversations with love and respect.

For helpful information on what TrueLove.Is is and is not, here’s a note from Pastor Ian. Link in bio”.

Netizens were outraged with the group and criticised them for the message they were trying to spread. -/TISG