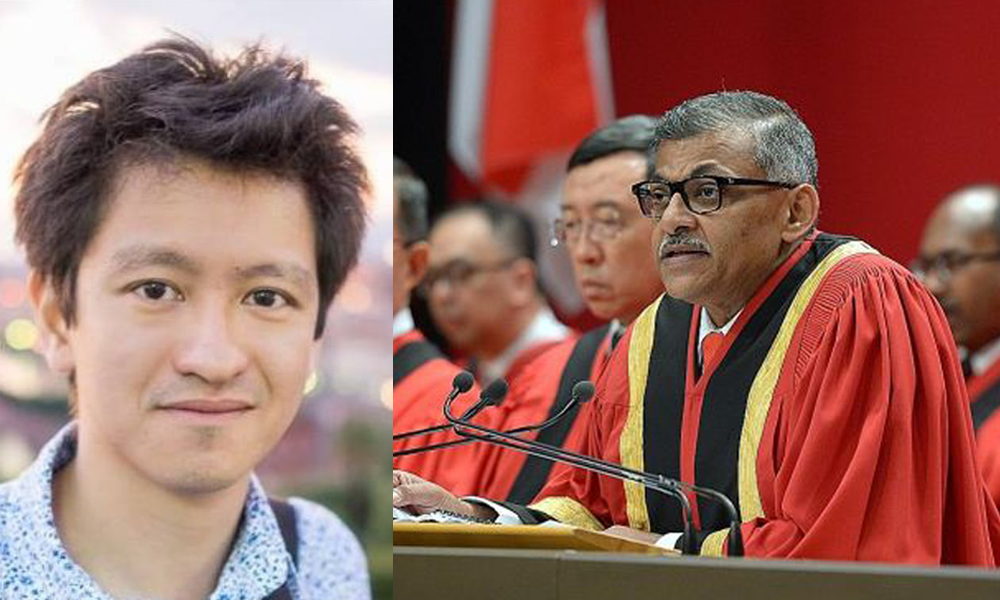 The AGC initiated legal action against Shengwu when he refused to remove a private “friends-only” Facebook. Shengwu is now appealing against an earlier High Court decision that allowed the AGC to serve papers on him outside Singapore.

AGC lawyers and Shengwu’s counsel were instructed by the Apex Court to make legal submissions addressing certain issues like whether a new law that allows one to serve papers on a person who is overseas can be applied retroactively and what laws allow local courts to exercise jurisdiction over someone who had allegedly committed contempt of court but has gone overseas.

Taking the AGC’s Senior Counsel Francis Ng to task, the Chief Justice criticised: “Your arguments have abandoned the original arguments of the Attorney-General for proceeding (with this case).

“You’re now saying that the correct jurisdictional basis is Section 15, but that was not the basis on which you obtained your original leave. If you wanted to pursue a different line, it was incumbent upon you to come and ask permission.”

Section 15 of the Supreme Court of Judicature Act, that the Chief Justice cited, defines the criminal jurisdiction of the Singapore High Court. Ng responded that the AGC was not changing the original arguments it had relied upon for proceeding with the case.

He further acknowledged, “I wrongly assumed that the breadth of the question permitted latitude.”

Shengwu’s counsel, Abraham Vergis of Providence Law Asia, further hit out at the AGC: “It was quite troubling that in different courts, the AGC was making contrary arguments…we say that the AGC should be advised to be principled and consistent when it comes to making such submissions.

“When they take very jarring positions before the courts….that does not conduce to the administration of justice and it does not inspire confidence.”

Noting that Order 11, Rule 1 of the Rules of Court, was promulgated in Oct 2017 – three months after Shengwu’s post was made – Vergis argued that the new legislature that sets out the basis for courts here to exercise jurisdiction “manifestly did not intend for the provision to apply retroactively.”

He added that the wording of the legislature “does not preclude retroactive application. The law is that the various limbs of (Order 11) should be broadly construed.”

The Chief Justice and the panel of Judges of Appeal have reserved judgement on the matter.

Support for Shengwu appears to be high among Singaporeans. When Shengwu’s father, Lee Hsien Yang, revealed last week that the AGC is seeking to apply new laws retroactively against his son, many Singaporeans were outraged and asked Lee to take a stand against this by contesting against the ruling party in the next General Election.

When Lee shared coverage of the Apex Court case on Facebook, Singaporeans echoed this call and expressed their support for his son. Some also expressed disappointment that taxpayer dollars are being used to settle this matter in court: The AGC initiated legal action against Shengwu over a private “friends-only” Facebook post he wrote on 15 July 2017. Shengwu made the post during the public Lee family feud, shortly after his father Lee Hsien Yang and his aunt Lee Wei Ling leveled allegations of abuse of power against their elder brother, current Prime Minister Lee Hsien Loong.

Linking an article that covered the feud, Shengwu commented that “the Singapore government is very litigious and has a pliant court system.”

Taking issue with the post, the AGC sent Shengwu a letter and said that “the highly inflammatory nature of these assertions…directly contradict Mr Lee Kuan Yew’s values and the judicial system.”

Shengwu decided against removing the post even after the AGC asked him to “purge the contempt” of court and “issue and post prominently a written apology.” He instead amended the post to “remove any misunderstanding.”

Dissatisfied, the AGC applied for permission to commence contempt of court proceedings against Li Shengwu. The High Court granted permission for the authority to proceed in Aug 2017.

Meanwhile, Shengwu – who serves as an Assistant Professor in the world-renowned Harvard University’s Economics Department – has asserted that he has no intention to disrupt his “happy” and “fulfilling” life in the US by returning to Singapore to face the legal proceedings initiated by the AGC.Follow us on Social Media