Make rules that make sense, is all people ask, he wrote.

Singapore — He may be a newly-minted restauranteur, but opposition leader Chee Soon Juan still has choice words for the PAP government when he feels that the occasion calls for it, opening a Jul 20 Facebook post by stating:

“The PAP’s incompetence and one-step-behind-the-curve reaction in the ongoing pandemic is making life a misery for Singaporeans.”

Dr Chee, a longtime outspoken critic of the ruling People’s Action Party, this time focused on the response to the Covid cluster at KTV lounges, which has become one of the biggest in Singapore to date.

He posted an infographic about the new dining-in rules that were supposed to have been implemented on Jul 19 dictating the number of people who could share meals depending on their vaccination status superimposed with the word “Seriously?” in red. 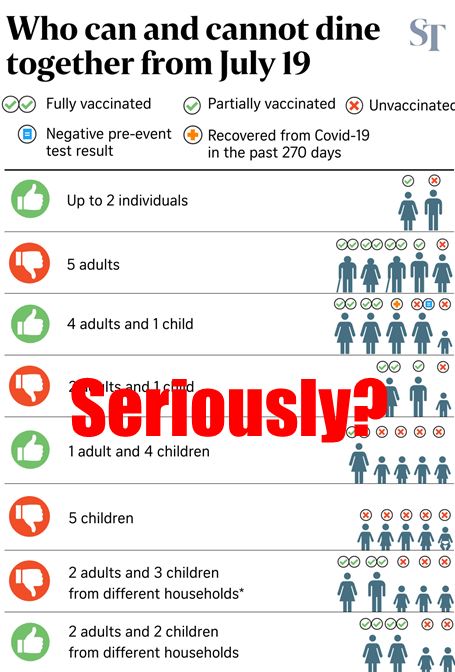 The secretary-general of the Singapore Democratic Party then asked, “How on earth did KTVs – with all their attendant illicit services – mask themselves as legitimate F&B outlets? And apparently, it’s not just one or two rogue outlets but scores of them.”

He added that when the number of cases rises, “the government reacts by placing onerous and, frankly, quite silly restrictions on legitimate eateries and restaurants.”

According to Dr Chee, “The latest restrictions defy common sense. You can have up to 5 diners but… Parents can dine in with their children but… Diners must be fully vaccinated but… Seriously?”

He underlined that the frequent changes in rules and restrictions are hard on the Food and Beverage industry, which has been among the hardest hit by the pandemic.

“Then they relax rules allowing up to 5 diners, then the no. of cases go up, then they say that they are unlike to revert to more stringent rules, then one week later, they do a U-turn and tighten the rules again,” he wrote.

“How do you run a business when the rules keep changing? This is what happens when you have generals and scholars sitting in their air-conditioned offices and putting pen to paper with nary any experience on the ground, making rules on the fly.”

Dr Chee then went on to say that at his restaurant, parents cannot sit together with their infant children since the limit was set at two per table, and it has ended up that mothers have sat with their babies in one part of the dining area, with fathers sitting separately.

“At the end, of the meal they get up and go home together.

Make rules that make sense, is all people ask.

In the meantime, legitimate F&B outlets are reeling, real businesses are destroyed, real jobs are lost and real Singaporeans are hurting.”

He appealed for Singaporeans to continue to support local restaurants, “Follow the rules (bizarre as they are), but go out and have a meal.”

However, as it turns out, the rules Dr Chee was referring to will be obsolete by Thursday (Jul 22), when Singapore is returned to Heightened Alert Phase 2 status until Aug 18 to stem the rising number of Covid cases.

During this period, no dining in will be allowed at all.

Unfortunately, this spells even worse news for the already beleaguered Food and Beverage industry. /TISG

Read also: “Where is the PAP minister for BB?” Netizens moved by SDP’s Chee Soon Juan paying a visit to the accident scene in Bukit Batok

“Where is the PAP minister for BB?” Netizens moved by SDP’s Chee Soon Juan paying a visit to the accident scene in Bukit Batok