The Independent Singapore News
Home News Can Dr Tan Cheng Bock unite the opposition or stand as a...

Can Dr Tan Cheng Bock unite the opposition or stand as a alternative party candidate? 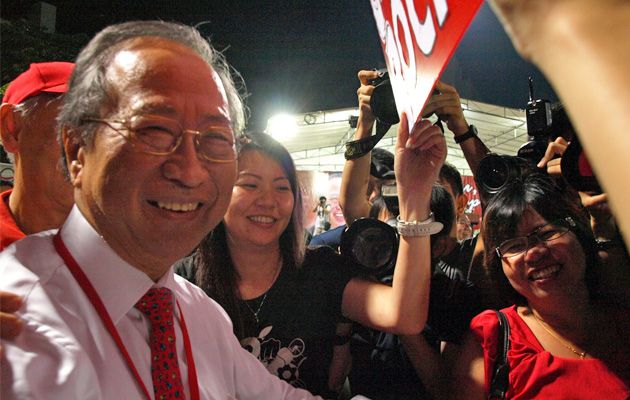 Together with 100 over Singaporeans, I sat in a posh auditorium at NUS listening to a 2-over hour talk by Dr Tan Cheng Bock on his post-PE plan. The audience consists of mostly silver-haired generation who attended many of our Hong Lim Park protests.

At the prime age of 77-years-old, Dr Tan still spoke vibrantly and did not display any sign of injury from a sprained leg he injured while playing golf recently. A chair was pulled over for him to sit if he is ever tired but the stout doctor never used it nor did he take one sip from the water that was poured out for him on the podium.

He spoke for less than half an hour leaving the bulk of the time for Q & A which is a smart move as there were many questions for the man – who will never lie low despite the regime’s less-than-fair tactics to bring him down during the recent PE.

Calling himself a rebel within the PAP camp, Dr Tan managed to survive six terms as a PAP MP – not an easy feat especially if sometimes you hold opposing views against the regime. He held the record 88% winning margin in 2001 GE which incidentally represented the best score in PAP’s election history then. He was also elected to the CEC from 1987-1996 – not bad for someone who is not always sitting on the right fence of the ruling party.

He also spoke of how the late Mr Lee Kuan Yew sought him out in his kampung clinic to stand for elections even though he has his own divergent views from the party. Recalling the good old days, he compared it to the current regime which consist of all yes-men and many paper-generals.

Many questions were thrown by an active audience, mainly focusing on whether he is open to unite and lead the fragmented opposition. Dr Tan skilfully avoided the question but gave enough to indicate that he is open to all possibilities.

But is unifying the opposition a viable possibility for the elderly statesman who still could call the shots when it matters the most?

He also pointed out that it is difficult to do that as firstly he has to be accepted by the alternative parties and secondly he must find out whether he is qualified to do so. Someone in the audience then shouted that he is more than qualified.

He mentions that most alternative parties have their own agendas and it will be difficult to ask them to give up on their own ideals and come under a unifying common platform. In fact, parties are known to shut off others whom they felt could not be part of the party’s slogan and principles.

Though we have a two-party system in Parliament now, it is very lopsided as the opposition forms less than 10% of all the Parliamentary seats and it is difficult to check the government with limited alternative representation.

I thought that it was a fair enough response to a very tough question as Dr Tan came from a party that dominated Parliament since it was founded and no other alternative party has ever came close to closing the gap let alone toppling the government.

The government’s strong-arm tactics against opposition politics mean that no party other than the PAP will rise up ever. We saw how WP after winning the first-ever GRC is never the same again and is currently facing a multi-million law suit over their town council mismanaged funds.

More importantly, will the opposition ever unite and form a united coalition against the ruling party? Could this be the only solid chance they have if they want to take something away in the next GE?

Except for WP and SDP, all the other opposition parties are small entities without much ground support and many only come out to contest elections when the time arises. The electorate’s main grouse against opposition is that they are hardly active in between elections and rarely could rally the populace on issues that matter.

Having said that, our apathetic attitude towards politics is also a deterrent factor and many people shy away from the opposition like a plague for fear that it may implicate them at the work place or social circle. People who join the PAP as a volunteer also do so not because they love the country but because there are fringe benefits attached to being a volunteer with the ruling party.

So when Dr Tan mentions that it is tough to gather all our opposition parties under one unifying coalition to contest in next GE, I couldn’t agree more.

But will Dr Tan come out from his fold and stand as an opposition candidate against his former party in the next election? Nobody I remember asked that question and I thought that it is a plausible option now that he has almost cut off all cordial ties with the regime after the backstabbing PE saga.

He kept mentioning that he will be a mentor to anyone be it from the ruling or opposing camp to win election. It was a bold move and I couldn’t believe what I heard.

But will Dr Tan come out of retirement and stand for election with the opposing camp?

It will be a first-ever preposition for someone who is formerly from the white camp but got converted to stand on the opposition side. Many ex-government servants eg Tan Jee Say, Dr Chee Soon Juan, Tan Kin Lian and Dr Ang Yong Guan have stood for election as opposition candidates but no one who has been a PAP MP before has ever switched sides.

Dr Tan will be a formidable opponent if he stands on an opposition ticket and he alone should command at least 40% of the votes. If by any chance he could pull in ex-PAP dissident MP Inderjit Singh, then the odds of winning a GRC will be almost 50-50. Inderjit is much of a rebel like Dr Tan and his speeches in Parliament must be troubling for the government.

Dr Tan together with Inderjit Singh – two ex-PAP MPs standing side by side against PAP MPs will send shudders down the spine of any minister at the other end who may be wondering if he needs to consider looking for another job.

There is so far no information of any ex-PAP MPs who can stand for election with the opposing side after they have given up their seats. However, ex-PAP MPs of course will need to count the cost of doing so as they will get the betrayal tag from the white camp.

When Dr Tan stood for election as the next possible President in 2011, there was this fear that he is directly opposing Tony Tan who is from the same camp and may not get much votes as a result. The votes were eventually split into roughly half and Tony Tan won by a slim margin of less than one percent which spoke volumes of how the white camp will vote if Dr Tan takes up the challenge to contest on a alternative party ticket in GE 2020.

A white supporter who is unhappy with the government will likely vote for Dr Tan than any other direct opposition figure as he is popular, reliable and more importantly speaks his mind on issues that matter.

His parliamentary record reveals a man who is speaking more for the country than his party.  In any constituency that he is contesting, there will be at least 30% of the white supporters who will vote for him out of respect and if you count in the opposition votes of almost another 30% we may see him sitting in Parliament again but on the opposing bench.

Singapore politics will never be the same again…

This article first appeared on the author’s blog: transitioning.orgFollow us on Social Media