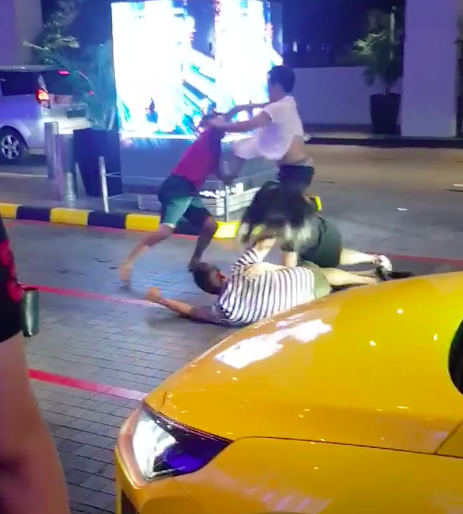 A fight took place at the taxi stand outside the Casino at Marina Bay sands over the weekend.

In a video shared by netizen Mitch Manuel, three men and a woman got in a tussle.

In the video, which garnered 789,000 views since Friday, two men can be seen exchanging blows.

During the fight, the man wearing a striped shirt flips his opponent, who is in a white shirt, over his back.

Throughout the fight, a woman tries to hold back another man in a red shirt. However, he kicks the man in the white shirt and joins the fray.

According to netizens comments on the video, the fight was allegedly because of someone cutting the queue of those waiting for taxis.

The man in the white top gets his shirt so torn during the fight that it falls off his body.

Towards the end, a security officer eventually steps in and breaks up the fight, though the man in the striped shirt and the now topless guy continue to point fingers at each other.

However, strangely, all seems to be resolved when the two men then fist-bump each other, prompting someone in the background to ask: “Are they really fighting?”

More than the fight though, netizens seemed to be interested in a bystander who took the time to pose for the camera.