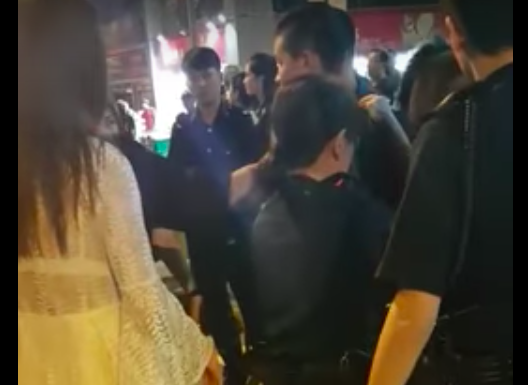 Two viral videos of a brawl that occurred outside a KTV lounge at Peace Centre, along Selegie Road, have been circulating Whatsapp Messenger and Facebook are from an old case in Aug 2017.

The first shows two groups of people spewing vulgarities, with police in the middle trying to de-escalate a fight. Despite there being about four policemen, a man in a black shirt continues his aggressive behaviour for the entirety of the video, with very little being done to stop him.

The second video, also of the same incident, was filmed by a different person. He repeatedly warns policemen, “Why do you want to handcuff me? Don’t touch me, I’ll give you [my particulars], no problem, just don’t touch me. I know the law, Sir. I didn’t do anything wrong, just don’t touch me”.

As he films this, about six policemen attempt to contain and arrest one man. Presumably his partner, a woman in white, begs, “don’t use force, don’t use force”. The man arrested appears to be the same aggressor as in the first video.

Concurrently, a mob of people start yelling in the distance as more police backup arrives.

The videos have also been circulating on Facebook, with many netizens asking why the police did not follow their standard operating procedure when it came to mob control. The situation seemed to have lasted for longer than necessary and many also felt that if the police were more aggressive in their actions, that the situation would have been brought under control quicker and more efficiently.