The minute-long video clip showed three mynas pecking at the raw meat at the back of the shop, while patrons bought cooked meat that was hanging in the front of the establishment 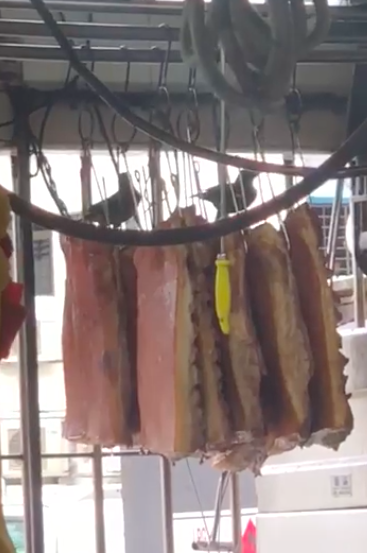 A video is circulating online showing birds helping themselves to slabs of raw pork hanging at the back of a coffeeshop stall in Yishun.

The minute-long video clip showed three mynas pecking at the raw meat at the back of the shop, while patrons bought cooked meat that was hanging in the front of the establishment.

The stall, located at a coffeeshop at Block 293 Yishun Street 22 sells roast meat, and the incident happened on May 3, at around 5pm.

According to an article on Shin Min Daily News, a 55-year old Mr Hong filmed the incident and uploaded it online.

Mr Hong told the Chinese Daily that he was patronising another stall at the coffeeshop when he noticed the birds pecking the slabs of raw pork hanging at the back of the braised duck stall.

“If the mynas are contaminated and they touch the raw pork or defecate on it, it’s very unhygienic. I bought char siew rice with roasted pork in the afternoon and when I think back about it, I feel very disgusted”, he added.

The report in the Chinese daily also said that when they spoke to the stall owner, a 55-year-old Mr Hu, he said that he cannot seal up the window grille at the back because it has to remain open to ventilate the stall.

“We usually cover the meat that has been cooked, but even if we cover the raw meat, the birds will find little gaps to peck at the meat. We can’t keep an eye on the kitchen all the time”, he explained.

He also apologized for the slabs of raw meat that the birds had been pecking on and said that they were discarded after the incident. /TISG