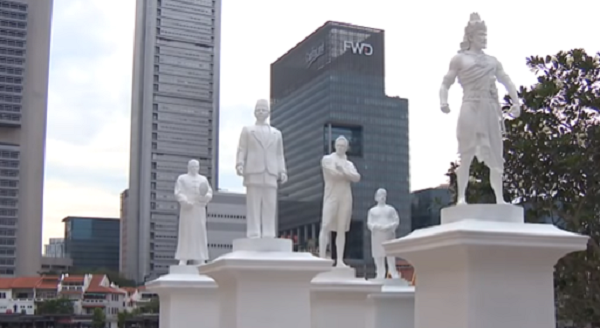 Singapore Bicentennial is a commendable idea. I see it as a very inclusive project which should, once and for all, stop a process of sinicisation which earlier on threatened to turn Singapore into something which it should never be allowed to be –a dangerous anomaly in this region.

In early efforts to carry out an imperial edict that the mother tongue of all Chinese Singaporeans should be Mandarin (and not the more natural and organic Hokien, Cantonese or Teochew), the establishment civil service worked overtime to pinyinise everything in sight, including names which have been existence for decades or centuries. All were obviously attempting to earn brownie points from their political masters.

Nee Soon became Yishun, Pek San Teng turned into Bishan and out of nowhere came the name Simei which to this day not many Singaporeans had any inkling was associated with the place where Simei estate had arisen. Who or what is Simei?

I also remember one well-known Mediacorp actress proudly declaring in an interview that she was staying in Zhenghua New Town. Have you ever heard of it? If I say Bukit Panjang, will that ring a bell? Of course, it would.

What about Zhujiao? The overzealous pinyinising brigade gave that weird name to the already well-accepted Tekka. After a hue and cry, the centre in Serangoon Road reverted to Tekka which, apart from being less of a mouthful than Zhujiao to pronounce for non-Chinese Singaporeans, was a minor landmark name which should not have been tampered with in the first place.

Perhaps the quintessential objection to the rampant pinyinisation came from architect Tay Kheng Soon who asked the street-naming committee in 2000: “When the day comes to name a boulevard or street after one of our famous leaders and important public figures, will we use hanyu pinyin names or will we use their Singaporean names? Certainly a street will have to be named after Dr Goh Keng Swee. And his hanyu pinyin name is Wu Qing Rui. Who in Singapore would know who Wu Qing Rui is?”

And Lai Fo Shi, founder of modern Singapore: You know who that was? Starts with R and ends with s. Yes, Raffles. And, yes there was an attempt to piniyinise even that name. And if there had not been another public outcry, everything else would have been very different as we celebrate the Singapore Bicentennial. The Singapore Bicentennial Office would have five statues by Singapore River, the last two of which would be a big mystery to Singaporeans: Sang Nila Utama, Munshi Abdullah, Naraini Pillai, Chen Dusheng (Tan Tock Seng) and Lai Fo Shi.

Cynical Singaporeans may view the whole exercise of planting four more statues next to Raffles as nothing more than the usual official practice of tokenism. Just another example of doing the politically correct thing.

I am not sure SBO actually realises the deep implication of the five statues.

On surface, we will see the move as a way of giving everyone – from all the main ethnic groups – a stake in the proceedings. They not only have someone from their community as one of the Singapore Historical Avengers. But, lo and behold, they will also know that SHA The Prequel to SG50 has stories from a diverse group of Superheroes. Chinese Singaporeans will now have a better idea who Nairini Pillai, Sang Nila Utama and Munshi Abdullah were, hopefully.

SCO will help reassure Singaporeans that this may be all that we have on this island. That we have nowhere else to go. Stop looking at faraway places – China or India or the US – for succour or protection or some kind of so-called ethnic belonging.

We have to make “Singapore, South-east Asia” work. Our past and our future would be here, nowhere else.

If the Bicentennial can help reinforce this stark reality, then I would say it is the best project since Stamford Raffles chose this island over Carimun in 1819.

Just having breakfast in West Coast or holidaying in Morocco?

Sending political messages through carefully choreographed snapshots on social media – this seems to be a trend.

Remember that picture of Dr Tan Cheng Bock sitting with Chee Soo Juan? Now, were they or were they not going to join forces?

Then there was food guru K F Seetoh posing for a smiley moment with hawker minister Amy Khor – yes the one in charge of the social enterprise project which got hawkers hot and bothered and which had them looking to Seetoh to articulate their problems.

Finally, the picture that may say or may not say a thousand words across the Causeway. Former Umno vice-president Hishammuddin Hussein and the deputy president of Parti Keadilan Rakyat Azmin Ali, current Malaysian Minister of Economic Affairs, posed for a Twitter picture, along with their families holidaying together in Morocco. The future Pakatan Umno in the making?