Part of the joke seems to be that the paper being auctioned is yet to be written, and contains only a blank page.

Singapore—Did the son of Lee Hsien Yang (and grandson of Lee Kwan Yew) just participate in an April Fool’s Day joke (albeit one that requires a special kind of mind to understand)?

It seems that Li Shengwu, who is an assistant professor of economics at Harvard University, is writing “the first paper on the economics of NFTs” along with a colleague, Mr Mohammad Akbarpour, an economics professor at Stanford University.

Prof Akbarpour tweeted on Apr 1 that “The non-authorized NFT of our paper (https://bit.ly/2O9RB02) has a current bid of 48000$. What should be the price of the authorized version?…”

Prof Li  retweeted this, captioning it, “Just how far can this joke go?”

Just how far can this joke go? https://t.co/hefNaTr5DO

Part of the joke seems to be that the paper is yet to be written, as Coconuts media points out, and contains only a blank page.

For those of us who may not know what exactly a Non-Fungible Token is (and we are pretty sure that’s the majority of humanity), it is “a unit of data on a digital ledger called a blockchain, where each NFT can represent a unique digital item, and thus they are not interchangeable.”

NFTs have been in the news lately, due to last month’s sale of the NFT artwork during an online auction by Christie’s for the princely sum of US $69,346,250, an amount approaching S$100 million.

The sale of “Everydays: The First 5000 Days” made the artist Mike Winkelmann, who goes by Beeple, one of the most highly-paid artists alive today.

According to an article in The Conversation, the artist “created this piece of digital art, made an NFT of it and offered it for sale. The bidding started at $100, and the rest of the auctioning process transformed it into a historical event.”

So, back to Li Shengwu. On Tuesday (Mar 30) Prof Akbarpour tweeted, “@ShengwuLi and I just wrote the first paper on the economics of NFTs. Don’t miss the great investment opportunity to bid for its #NFT,” which many commenters seemed to see as a joke. 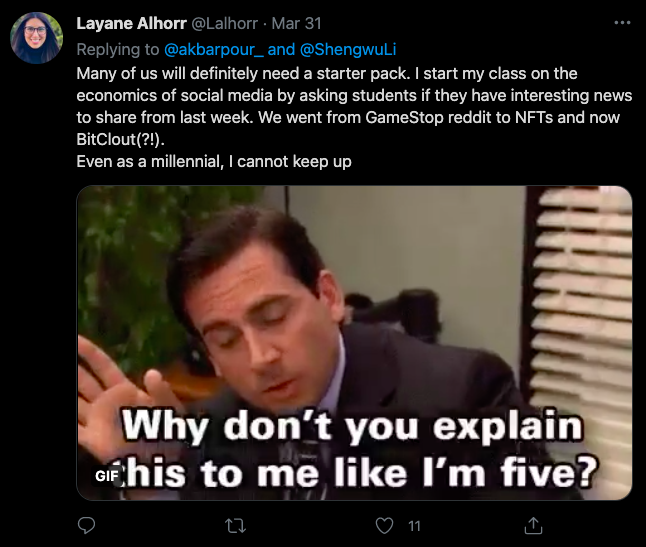 Others did not seem quite so sure.

It will be interesting to see where this all goes, we think.