Anwar’s optimism with October 13 audience with the Agong 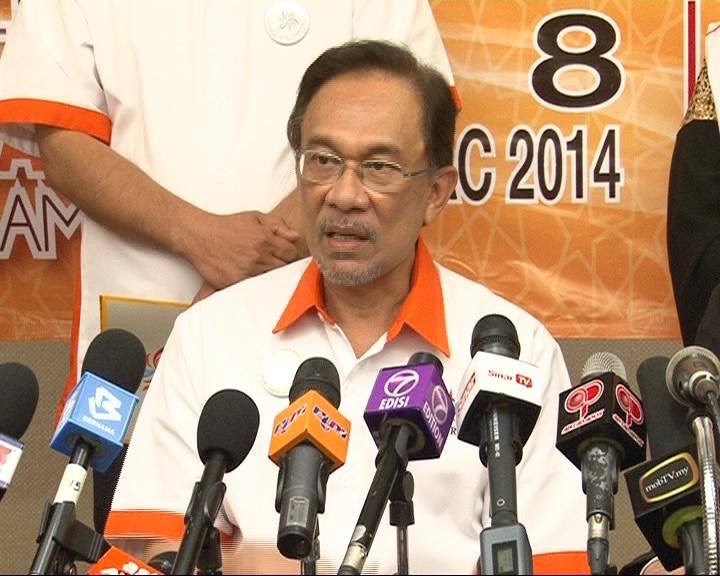 The Malaysian public still does not know what to make of that much publicised and somewhat promising meeting  that Opposition leader Dato Seri Anwar Ibrahim had recently with the King in Istana Negara.

The jury is still out on it. The much maligned, studied, victimised but sober Anwar is obviously making a serious attempt to regain the momentum to bring about some real radical change to the country.

In a sense it is not so much an individual effort. Rather Anwar seems to be the voice of the voiceless masses representing the bulk of the bulk of the country’s largest constituency who had tried to start that process of reform in late 1998.

It was a process that received no support from the then dominant ruling party, UMNO. The state’s security apparatus and the civil service efficiently clamped down hard on that effort with a mix of persuasion, propaganda and punitive strong arm tactics.

The process itself refused to be extinguished taking on new manifestations and surfacing variously as Bebaskan Anwar, Reformasi, Hindraf, Bersih and finally as the battle cry of Pakatan Harapan for accountability, good governance and transparency.

Even before the PH’s election victory in May 2018 in the two preceding general elections in 2008 and 2013 there were major setbacks involving ministers that ended the two-thirds parliamentary majority traditionally enjoyed by the ruling party.

From 2008 the MPs from Sabah and Sarawak who had had a secondary role previously were elevated by Najib to be accorded an approximately similar status with peninsular MPs just to provide him a simple majority. A Sabahan was appointed Foreign Minister for the first time in the country’s history.

The leaders who started this down-to-earth quest for balance, justice, reform and respect were initially courted and cultivated with promises that their causes would be accommodated. Soon they found out that the preeminent power holders were only interested in buying over the leaders of these movements while everything else remained unchanged. Najib did this with Hindraf and this example of Najib’s was emulated in an exemplary manner by Dr Mahathir, Tan Sri Muhyiddin Mohd Yassin and their carefully chosen ally, Dato Seri Azmin Ali.

When out of power these leaders spoke a different populist people’s language of representing the common people, the minorities, the Sabahans and Sarawakians but once in office they would harp about the abysmally poor situation of Bumiputras while using that Bumiputra element as a broad base to aggrandise power, empower and enrich selected cronies and kinsmen.

At the moment it seems increasingly and incredibly clear that Anwar is perhaps the only one who can make a difference because the country had been driven into a deep ditch where extensive elite corruption and extraordinary incompetence in high office has occurred. Abundant evidence of the existence of extensive elite corruption is borne out in the judgement convicting Dato Sri Najib Razak on July 28, 2020. The prime minister’s office appears to have conferred on the incumbent absolute, pervasive and imperious authority.

These failings of the elite leaders of the country have been tolerated helplessly and heedlessly for decades by most Malaysians. These failings were treated as almost innocent infinitesimal fraud- repeated acts of failure- whether to realise one Malaysia, Vision 2020 or a plea that the prime minister was the patriarchal paragon. For more than three decades public funds were squandered like ‘other people’s money.’

The truth is that since the mid-1980s the country moved away from the conservative financial management practiced during the preceding three decades. The era of Tun Tan Siew Sin and Tun Hussein Onn was often dismissed and shelved as a relatively easy phase and the country was ushered into a regime of reckless experimentation, exhibitionism and exuberance.

The promises provided with a new economic policy, car manufacturing possibilities, electric vehicles, and tele-health, light aircraft manufacturing were alluring. The Look East policy was announced without any proper study and some people began to dream that there were little Japans and Koreas in the making in multicultural Malaysia. It was a farfetched fantasy but it was put across with so much conviction, consistency and from such commanding heights that it easily percolated into the thinking of impressionable minds. Forty years later Malaysia has a   per capita GDP which is less than a third of the Japanese and Koreans.

Instead of speaking truth to power, civil servants reaching top positions in the bureaucracy in the late 1980s began becoming amenable, compliant and obsequious to the dictates of the political leadership. Some began sounding like the famous much travelled prime minister himself. One fellow who I had counted as a friend told me ‘In Europe our focus is Bosnia, that’s where the attention should be. ‘ While  emphasising Antarctica and Bosnia in our foreign outlook we  developed some kind of an  absentmindedness and amnesia about our own country.

Within the country a seemingly sustained but subtle and not-so-subtle effort was mounted to plant in the dominant ethnic group suspicions, skepticism, delusions and distrust of all the minorities-whether it was Sabahans, Sarawakians, Chinese or Indians. These suspicions and distrust was sown through both educational, political and religious discourses.

Members of these minorities were specifically targeted to be excluded from reaching leadership positions in various fields. This is the reason why not one of the vice chancellors of the 23 public universities in the country could be drawn from any of the minority communities.

Given the diversity of Malaysia’s population, schools had traditionally had a mix of teachers of various ethnicities and had included for a long time, foreign nationals belonging to missionary organisations. This was deliberately changed so that some four fifths of the teachers were drawn from the dominant ethnic group and slowly this proportion was extended to cover supporting services in almost every sphere of public sector employment. Consequently Malaysia which was probably one nation in the 1960s became an agglomeration of nations with notions of even some Arabisation.

The next thing that happened was that the government establishment grew to more than a million and a half and at that level the leadership began to view government servants as a vote bank who had to be paid adequately and pandered to.

Discipline, dedication to duty and productivity began to wane and have a lesser place in the system. What the Public Services Department celebrated was quality and high performance where a maximum of two percent of the establishment was singled out for commendation with escalated salary increments. Realistically even five percent can’t drive a service but this is precisely what happened.

In retrospect Anwar Ibrahim partly contributed to the development of these schisms in Malaysian society.

A series of well-orchestrated top down obviously obnoxious and odious actions against Anwar Ibrahim have been directed against him from September 2, 1998. Some of the residual effects of that onslaught remain. Twenty two years later after two lengthy periods of state driven persecution, incarceration, political and media blackouts Anwar is a more seasoned, wiser and a more wholesome man.

He now represents not only the peninsular Malays of the broadest spectrum but also several minorities in the country. Together with his wife, Dr. Wan Azizah Wan Ismail and their daughter, the MP Nurul Izzah he represents the best hope to rebuild a broken and bruised nation on the basis of some equality.

There can be no good reason for any reasonable person to stand in Anwar’s way. On the basis of the GE 14 election manifesto Anwar should be the prime minister by now. That mandate of the people should not be thwarted, not by some backdoor government’s backhanded manipulation of parliamentary procedures.

Anwar’s reputation, with the help of three previous prime ministers, has been dissected and displayed to the public and he does not appear to have been involved or implicated in anyway whatsoever in any banking, financial, industrial or investment fraud. Anwar’s rightful claim to the top leadership position must not be treated the way public funds have been misapplied in the past. The People’s mandate must be respected.