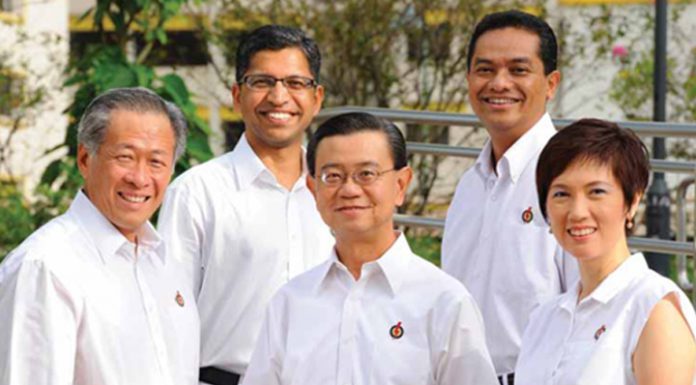 Bishan-Toa Payoh GRC Member of Parliament Josephine Teo is organising a briefing on what CPF is for, especially for residents of her ward. This talk, to be held on 14 April at an RC Centre at 229 Bishan St 23, comes almost four years after her ex-colleague hosted a similar session that quickly became mired in controversy.

On the 14th of June 2014, several residents of the constituency came together for a talk on CPF hosted by former Bishan-Toa Payoh GRC MP Hri Kumar Nair. The talk, held at Thomson Community Centre, was entitled “CPF – An Honest Conversation: Public Dialogue with Thomson-Toa Payoh Residents”.

It is possible that the talk did not go as smoothly as Hri Kumar had perhaps hoped.

First, there was an intrusion by opposition politician Kenneth Jeyaretnam. As Hri Kumar was presenting some slides on the Budget, the Reform Party leader who gatecrashed the event – that was held exclusively for residents – grilled Hri Kumar about whether the figures he was showing really represented the government’s true fiscal position.

Besides noting that the NIRC is matched almost entirely by the Special Transfers in that year’s Budget, Jeyaretnam highlighted that out of the $8 billion that was taken out of the NIRC to fund the Pioneer Generation Package, only $240 million was budgeted to be spent in 2014.

Hri Kumar deftly dodged Jeyaretnam’s questions and told him that he can write in to the government with his questions:

What Hri Kumar couldn’t avoid though was an appeal by an elderly Bishan-Toa Payoh resident who took the opportunity to ask questions at the talk to emotionally beg the authorities to return her hard-earned CPF savings to her.

In her appeal, the resident revealed that she is a spinster with no children of her own. She begged the authorities to release her hard-earned CPF savings so that she could arrange for her funeral and her rites as she is in her old age. A video of the 76-year-old’s appeal went viral after it was uploaded online:

After this encounter with his resident and once the forum concluded, Hri Kumar spoke to reporters from the Sunday Times regarding the elderly resident’s issue and reportedly said: “This is a resident who has an issue. I spoke with her personally after the dialogue and I’ll be doing my best to assist her. She’s a resident in one of the landed estates in Thomson.”

Hri Kumar’s indication that the resident lives at a landed property could have led online sleuths to uncover the woman’s residential address. Shortly after the ex-MP’s comments to the publication, an image showing the resident’s home was posted on the Facebook page of Fabrications About the PAP (FAP) – a group known for its open support for the ruling party.

The image was accompanied with the following caption: “Feeling sorry for her? She stays in a bigger house than you.” Administrators of the unofficial PAP fanpage added: “Auntie chose not to withdraw her CPF at 55. Auntie has been receiving monthly payouts; auntie is well to do. Auntie asked for some flexibility on her remaining CPF, but now used as a political tool by irresponsible opposition…”

The post began trending online with many netizens excoriating the woman, opining that she should just sell her house to protect herself. What many didn’t realise was that the elderly woman couldn’t sell her house.

A person close to the elderly woman, who was later identified as ex-teacher Ms Rene Yap, told reporters that Ms Yap’s house is an inherited property that is co-owned with her three siblings, all of whom she reportedly has poor relations with. This means that Ms Yap cannot easily downgrade her housing even if she wants to do so.

The same reporters tried to contact Hri Kumar for comment on how his party’s supporters have launched a cyber-lynch attack against his resident. It appears that he did not respond.

Hri Kumar’s silence is of note. Just a year before this incident, he criticised hateful conduct online and added: “There are many instances online where people snap photographs of others in public spaces for the purpose of subjecting them to online ridicule and scorn. The question is whether we as a society find this acceptable, and if not, whether the Government should step in.”

Hri Kumar has also been known for repeatedly hitting out at The Workers Party, criticising the opposition team for sitting on the fence when it came to “difficult issues”.

The year after the CPF forum he had organised, Hri Kumar stepped down from politics. Last year, he was appointed as Deputy Attorney-General. He has since been involved in several high-profile from this capacity, from Tan Cheng Bock’s constitutional challenge against the reserved Presidential Election 2017 to the appeal of the City Harvest Church trial.

Four years after Hri Kumar’s attempt at a CPF forum, Josephine Teo is giving it a shot with her briefing:

A photo of a letter to her residents regarding the talk has been circulating online. In the letter, Teo invites her residents to the event and explains: “A lot of people commented that CPF can be seen but cannot be touched, CPF is my money but cannot be used. To reply these comments, we must first ask “What is CPF for?” CPF is designed to help you meet your three basic needs.”