More than a day later, they found the customer they had overcharged. “Customer found, apology accepted, wefie with our team taken,” wrote the management in a social media post An honest minimart in Ang Mo Kio took to social media to look for a customer they accidentally charged S$1,397 for.

In a social media post, Angel Supermart apologized for the error that they said was due to: “Our staff pressed the wrong amount and failed to verify”.

They added that the customer bought items for S$13.97, but that his credit card was charged for S$1,397.

The minimart, located at Block 631 of Ang Mo Kio Avenue 4, added in a Facebook post that the man had purchased his items at 2am on May 31.

They shared a CCTV screengrab of the man, along with a staff member’s telephone number for him to call. More than a day later, they updated the post adding that they had found the customer they had overcharged.

The minimart added that they offered the man a VIP membership along with some drinks and snacks as well.

Netizens who commented on the post all praised the minimart for their honesty and for reaching out to find the man they had overcharged. 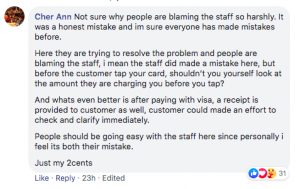 Responding to media queries, Founder Daniel Tan said that they only identified the error after the shop had closed and the day’s sales registered.

The minimart tried searching to no avail for the man’s personal details in its list of loyalty programme members as well as the credit card clearing center. They then decided to go public to avoid any misunderstanding.

Mr Tan also added that the employees were advised on the matter.

“The staff has been issued a warning and are counseled. They will be paying the credit card surcharges pertaining to the refund,” he said.

The employees were new and would keep their jobs, he added.

“We would like to provide a conducive environment for staff to learn and grow,” he added. /TISGFollow us on Social Media