Singapore—The country’s Parliamentary Secretary of the Ministry of Home Affairs, Amrin Amin, took to social media on Wednesday (Feb 12), to highlight what he termed as ‘disgraceful actions’ stemming from fear and panic due to the current outbreak of Covid-19.

This novel coronavirus started in Wuhan, a city in central China, late last year. It has gone on to spread worldwide, with more than 50,000 people infected and a death toll of over 1,300. In Singapore, there are now a total of 50 confirmed cases of Covid-19.

Fears arising from the fast pace with which the virus has spread have caused a series of rash behaviours from Singaporeans, from shaming health workers to panic buying masks and even groceries, and so on.

He wrote, “Taxi drivers reluctant to pick up staff in medical uniform. A healthcare professional’s private-hire vehicle cancelled because she was going to a hospital.

A nurse in a lift asked why she was not taking the stairs and that she was spreading the virus to others by taking the lift.

A nurse scolded for making the MRT train ‘dirty’ and spreading the virus. An ambulance driver turned away by food stall workers.”

Mr Amin continued, “These are some examples of disgraceful conduct. Discriminatory actions.”

He reasoned that this is not representative fo the true character of Singaporeans, whom he believes are “better than that!”—calling them the work of only a very few people.

“They do not reflect the best of Singapore. In fact, they do not represent us at all. These are shameful acts of a small irrational minority.

We’re better than that!”

He then went on to praise the officers of the Singapore Civil Defence Force, whom he had visited on the same day.

For him, they evidently embody what the country is all about, not those who act rashly out of fear and panic.

He noted that the SCDF, as well as the country’s valiant healthcare workers, deserve “support and encouragement.”

Mr Amrin added, “I met our Singapore Civil Defence Force officers at SCDF HQ this afternoon. I thanked our hardworking men and women for bravely answering the call of duty with distinction and conviction.

Ordinary people, with families – like you and me. Yet, they rose to the occasion. They shared with me their pride in serving Singapore and Singaporeans in this time of need.

I am proud of them. Our healthcare and uniformed officers and frontline officers deserve our support and encouragement.”

Mr Amrin highlighted how important it is all the more at present to stand united—as this is the true essence of being Singapore.

“In crisis, we stand together, stand united – we close ranks as one people. That is the Singapore I know.”

Mr Amin’s post has been shared hundreds of times, with people echoing his call to treat health care workers with respect and kindness. 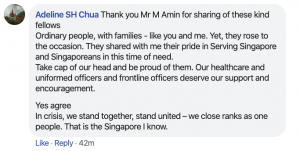 One netizen eve asked that the mental health of front line workers also be taken care of.

To which Mr Amin agreed