The Independent Singapore News
Home News AMA with David Moskowitz and Gaurang Torvekar from Attores to talk all... 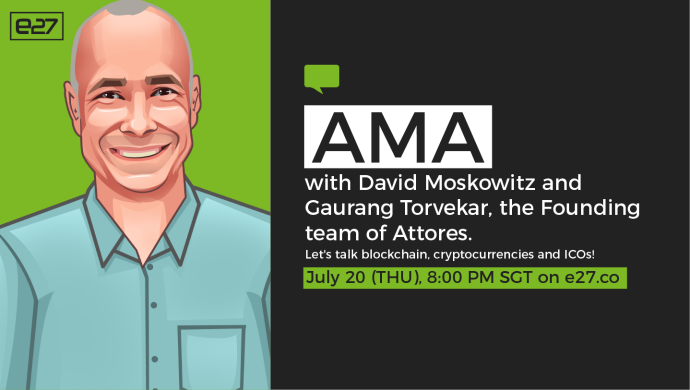 Cryptocurrency price explosions, ICOs, the distributed ledger; they are all hot topics these days

Editor’s Note: David and Gaurang are off now. Thanks everyone who asked questions. If you have more questions, feel free to reach out to them via Twitter and they are more than happy to engage.

For people just arriving, go read the discussion. Some really interesting insights for both newbs and people with some knowledge of the industry. Thanks again David and Gaurang!

In the last few months, the exponential rise of the price of Bitcoin, coupled with a new trend of Initial Coin Offerings (ICOs) has made blockchain technology the talk of the town.

On Thursday at 8pm, David Moskowitz and Gaurang Torvekar, the Founding team of the smart contract startup Attores, will be live on e27 to answer all your questions when it comes to the blockchain.

Both industry veterans, when it comes to this topic, there is nobody better.

Also Read: e27 AMA with David Sanderson, the Founder and CEO of Nugit

The post AMA with David Moskowitz and Gaurang Torvekar from Attores to talk all things blockchain appeared first on e27.

Motorcyclist flown across intersection in a crash with vehicle

Singapore’s road to recovery — The impact of Covid-19 and the...