The Independent News
Home News All I want is a HDB loan: Single mum

All I want is a HDB loan: Single mum 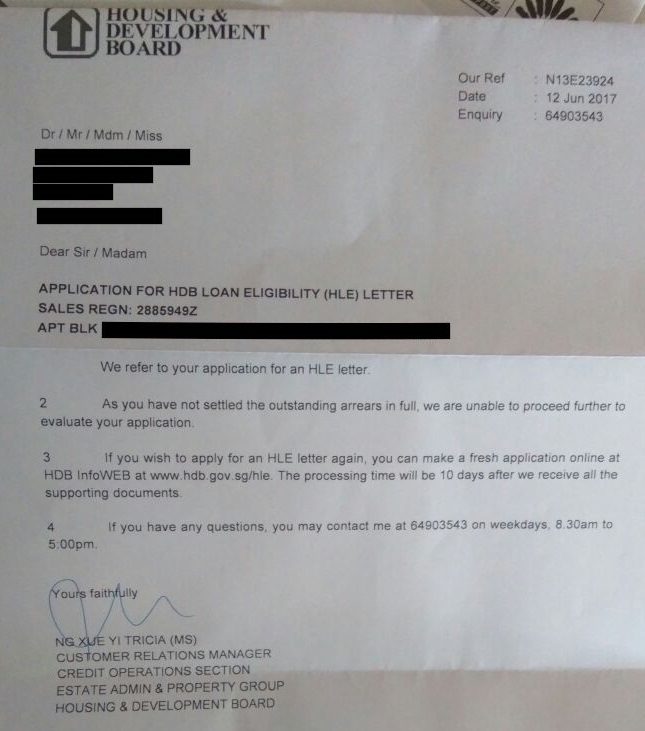 Michelle, a single mother with two children, is appealing to the HDB for more help and flexibility in paying for her BTO flat.

Her unit in Woodlands was completed on 30 May but she is desperately afraid she can’t make the payments.

On 12 June 2017, HDB responded to her application for a HDB Loan Eligibility letter. They replied that they are unable to process her application because she has not completely settled the outstanding arrears for her Lower Delta Road rental flat.

Michelle works as a front desk administrator. Her son is a full-time National Serviceman (NSF), while her daughter is studying for a diploma at Nanyang Academy of Fine Arts (NAFA).

While she and her son are the breadwinners of the family, she hopes that HDB would be more flexible in granting her a loan. Her monthly income of around $2300 has to support her daughter’s education and was also swallowed up by the cost of caring for her cancer-stricken mother who has since passed on.

To cope with her financial problems, she previously turned to instant credit and is now working to pay off her debts. She also has to pay part of her rent arrears to HDB every month, after HDB offered her an instalment plan to settle the outstanding rent for her previous rental flat at Lower Delta Road.

Most of her monthly income goes to settling her debts while paying her current rent. She is trapped in a vicious cycle and finds it extremely difficult to pay for her BTO flat without a HDB loan.

According to her, her ex-husband absconded in 2009 after selling their matrimonial HDB flat and her family was forced to shift to a rental flat in Lower Delta Road. Her ex-husband has defaulted on maintenance fees which amount to about $7000. This has further strained her finances and she is now seeking help from the Family Courts.

She hopes that HDB would consider her circumstances as a single parent struggling with finances and grant her a loan.

She does not have that much CPF left as she has been supporting her daughter’s education through her CPF, and is worried that her funds will be milked dry if she is forced to use it fully to pay for her BTO flat as well.

She says her BTO flat requires also some renovations as it comes without flooring, kitchen sinks, and bedroom doors. All this will add to her financial woes.

“All I want as a single mum is to give my kids a better future and don’t want them to suffer like me”, says Michelle, “I want them to get out of this circle”.