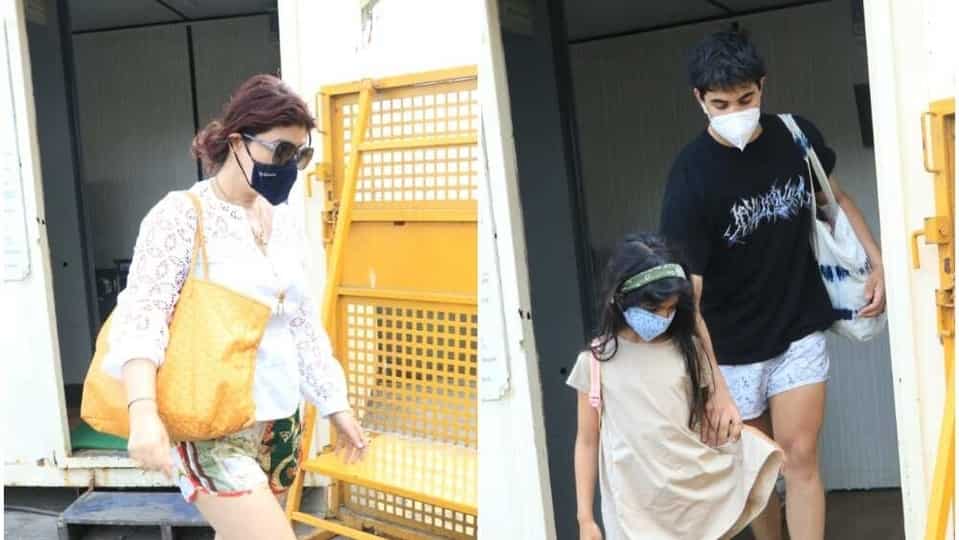 India — Pictures of actor Akshay Kumar‘s wife, writer Twinkle Khanna, and their children, Aarav and Nitara, have been shared online. Twinkle and the kids were spotted at the Gateway of India on Monday.

Pictures showed her wearing a white top and printed shorts, while Aarav wore a T-shirt and shorts. He held Nitara’s hand as they walked through checkposts and barricades.

All three wore masks, amid increasing Covid-19 cases in Maharashtra, and carried bags. The family recently returned from a vacation in the Maldives, and Twinkle and Akshay had shared a couple of social media posts from the popular island destination.

The family keeps Aarav and Nitara away from the media spotlight. For the longest time, Twinkle didn’t reveal Nitara’s face in social media posts. She’d told Pinkvilla in 2017, “I think she (Nitara) is very young and she should get her privacy. I don’t really put up pictures of my son Aarav. I think that they are growing and if they come out with me for a movie or something and then if someone clicks pictures then I am ok. As parents we try to keep them away from the limelight until they understand the consequences and learn to handle themselves.”

Akshay has been shooting back-to-back projects. He completed work on the spy thriller BellBottom last year in Scotland, and then moved on to Atrangi Re. His cop film, Sooryavanshi, will be released in April, after being delayed for more than a year because of the pandemic. Next up, Akshay will shoot Ram Setu, which has been described as an adventure film. The team recently flew to Ayodhya in Uttar Pradesh for the ‘mahurat’ shot.Follow us on Social Media