Watch out, Samsung fans! The new Samsung Galaxy S10 may be dropping into the market as early as February 2019, and it looks like this particular model underwent a serious overhaul. 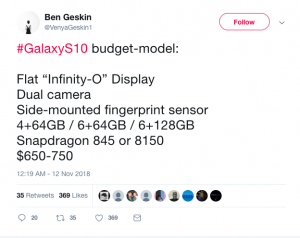 It’s also possible that the foldable Samsung Galaxy S may be launched at the same time as the Galaxy S10, and perhaps be made available the following month, in March, with a 5G version of the S10.

But price-wise, the folding phone will likely cost more than a pretty penny, with industry experts estimating the cost to be around US $1800, or almost S$ 2500.

Techradar says these are hottest leaks for the Galaxy S10

For the design and display: Three different screen sizes, A bezel-free and notch-free design, A 19:9 aspect ratio and 1440 x 3040 resolution.

For biometric security: An in-screen fingerprint scanner and an improved 3D face scanner

For the camera: A triple-lens rear camera on the top-end model, 12MP, 13MP and 16MP lenses, A dual-lens front-facing camera