The Department of Environment (DoE) will investigate these sites and determine the nature of the waste, whether it is from domestic or scheduled waste, scheduled waste is hazardous and has a negative effect on the environment and public health 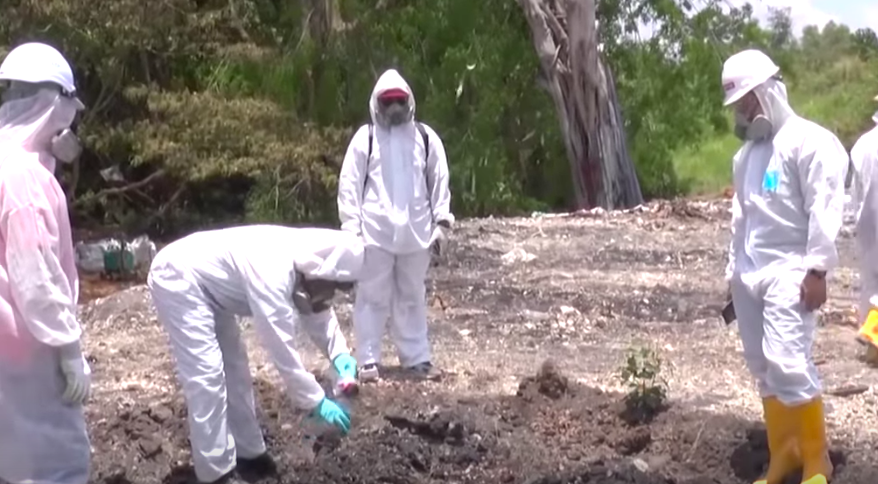 Iskandar Puteri—Satellite and drone imagery have shown that there are 46 potential toxic chemical pollution sites in the Pasir Gudang industrial zone. This was announced on Wednesday, March 20, by Yeo Bee Yin, Malaysia’s Energy, Science, Technology, Environment, and Climate Change Minister.

She said that these sites were discovered by authorities during the monitoring of the toxic chemicals dumped illegally in Sungai Kim Kim on March 7, wherein around 5,500 people had to seek medical treatment due to the toxic fumes, and all 111 schools in the area were closed.

Aside from Sungai Kim Kim, dumping grounds were also discovered at Sungai Masai and Sungai Semilang.

The Department of Environment (DoE) will investigate these sites as we are so far only basing this new information on data received from the satellite and drones. We will send DoE officers personnel there as there are no concrete statistics right now.”

The nature of the waste is still unclear. “We don’t know if the pollution we observed there is from domestic or scheduled waste,” she added.

The Department of Environment website indicates that scheduled waste is that which could be hazardous and could possibly have a negative effect on the environment and on the health of the public.

Ms Yeo made this announcement at the Datuk Jaafar Muhammad building at Iskandar Puteri after the tabling of the complete report on the recent toxic incident at Sungai Kim Kim, which was also attended by Dr Sahruddin Jamal, state Health, Environment, and Agriculture Committee chairman.

The Minister was asked whether the other 46 locations would also need clearing.

She added, ”We hope that the state government and local authorities will take action by cleaning the identified locations.”

She also said that none of the sites were responsible for the toxic waste at Sungai Kim Kim.

“There was only one source of gas poisoning, that is Sungai Kim Kim.”

However, the Minister also said that a committee would be set up by her ministry for assessing the industrial zone of Pasir Gudang, as well as the rivers that have been polluted in this location.

“This is to spare the residents from being affected any further by the Sungai Kim Kim incident. We will also propose that such committees be set up in other industrial zones in the country.”

By Tuesday, March 19, officials declared that the clean up of Sungai Kim Kim had been accomplished. “A total of 900 tonnes of soil and 1,500 tonnes of polluted water has been cleaned,” Ms Yeo said.

According to Health Minister Dzulkefly Ahmad, “I am grateful that there was no death in the incident. The decision not to declare a state of emergency was also right and apt.

The public wants the criminals who dumped toxic chemical waste into the river to be acted upon and taken to court.”

Ms Yeo also talked about the lessons learned from the incident. “What is being done here, will be extended to other industrial zones in Malaysia. What we learnt from this incident is that we have to tighten the standard operating procedures to protect the environment.

She added that the Environmental Quality Act 1974 will be amended, ensuring that the recent illegal chemical poisoning at Sungai Kim Kim would not be repeated and that heavier penalties would be meted on individuals who commit such acts.

In Singapore, the quality of water and air has remained unaffected. On Wednesday, Singaporean authorities said, “The ambient levels of volatile organic compounds (VOC), including benzene, measured at the VOC monitoring stations in the North-eastern region, remains within safe levels.

There are no significant variations in the water quality … in our local waterways and reservoirs in North and North-eastern Singapore; the waters of our recreational coastal beaches and the Straits of Johor.”