Singapore – As the prosecution pushed for life imprisonment, the parents involved in a deadly case of child abuse were sentenced with varying lengths of imprisonment and caning.

On Monday (July 13), a couple initially acquitted of murdering their five-year-old son was sentenced to more than 20 years jail time for lesser charges of voluntarily causing grievous hurt by dangerous means, according to a channelnewsasia.com report. Ridzuan Mega Abdul Rahman was sentenced to 27 years’ jail and 24 strokes of the cane, while his wife Azlin Arujunah was sentenced to 27 years’ jail and an additional 12 months in prison instead of caning. The prosecution fought for life imprisonment for the couple, yet Justice Valerie Thean did not perceive this sentence to be appropriate despite the “grave” offences.

In January 2011, shortly after the child in question was born, he was given to another family and eventually returned to his parents’ care in May 2015. About a year later, the abuse began. The child was hit with different tools such as a broom or hanger and pinched with pliers, reported channelnewsasia.com. Aside from being caged in a cat crate, the young boy had scalding hot water poured over him, resulting in blisters and his skin peeling.

According to one account, on October 22, 2016, the boy allegedly refused to remove his shorts for a bath which caused him to receive a beating from his father. The latter also poured cups of hot water on the child. As the boy crouched down on the toilet, he fell forward and lost consciousness. The parents decided to bring him to the hospital more than six hours later as they feared being apprehended by authorities for their actions. Raw, untreated wounds were discovered all over the boy’s body on top of a blistered palm presumably caused by a hot spoon applied by the father for stealing milk powder to eat. The boy went into shock during surgery. Due to the severity of his wounds and the condition of his skin, doctors had to inject his bones directly.

After consideration of past similar cases, Justice Thean noted that the grievous hurt relevant in this particular case was “hurt, which endangers life” and not one that led to “death.” Furthermore, medical evidence wasn’t able to precisely pinpoint which injury was caused by a specific incident of abuse. A total of four scalding events resulted in the boy collapsing. As for the degree of involvement, Justice Thean mentioned there was no clear indication that one parent was more guilty than the other. However, it was discovered through findings that Mr Ridzuan introduced the abuse in the family.

No weight on alleged psychiatric conditions

According to the report, Justice Thean dismissed arguments made on the circumstances of the couple, putting no weight on arguments of their alleged psychiatric conditions. The duty of a parent remains despite economic or social conditions, said the judge.

Justice Thean highlighted that cases of child abuse are “severely aggravating” and require a severe sentence or punishment due to the “inhumane treatment of a vulnerable young victim.” The parents were acquitted of murder as the judge found no evidence indicating the intention of murder from both parents before the scalding incidents. It was not safe to convict the couple with murder charges as this has not been proven beyond a reasonable doubt, said Judge Thean.
The prosecution, however, intends to appeal against the acquittal of the murder charges.

Members of the online community stood by the prosecution and urged for life imprisonment for the parents. “No punishment inflicted on the so-called parents could ever bring him back,” said Facebook user Daniel Lim. Others noted there was a lapse between social welfare services or the adoption agency for not following up on the child’s condition after his return to the biological family.

“We need to make sure this child’s short and tragic life served as an impetus for the system to be changed and be improved and that no child ever undergoes such terror and suffering,” commented Facebook user Gilbert Cheah who has been following the case. 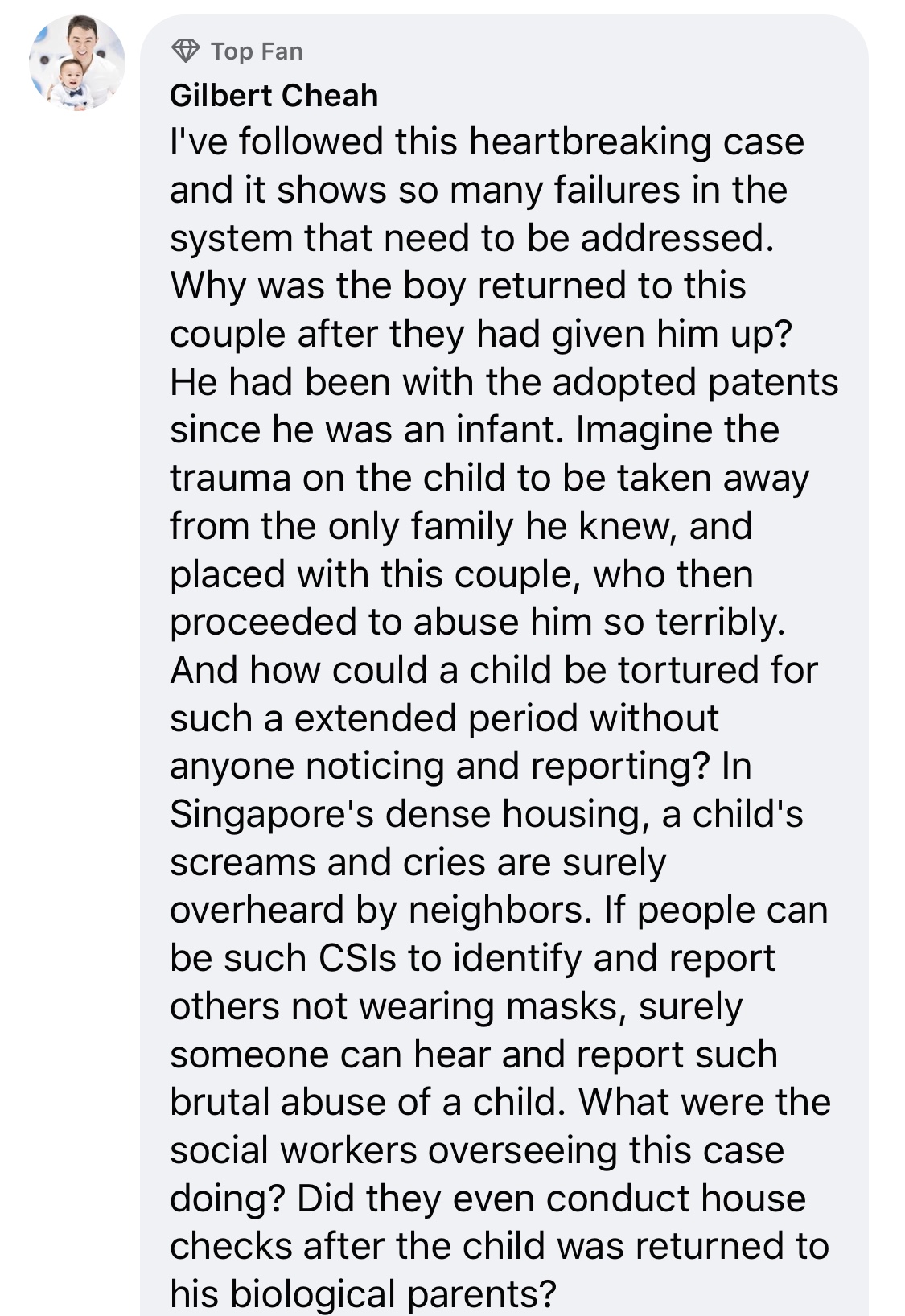