In the 6-second long clip, the Trade and Industry Minister appears to be dozing off. The video was taken on Feb 18, during the unveiling of the 2020 Budget 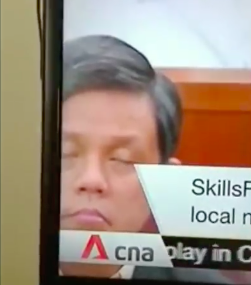 A video of Minister Chan Chun Sing appearing to fall asleep during a parliamentary session has gone viral.

In the 6-second long clip, the Trade and Industry Minister appears to be dozing off, earning him the ire of many netizens.

The video was taken on Tuesday (Feb 18), during the unveiling of the 2020 Budget by Deputy Prime Minister and Finance Minister Heng Swee Keat.

In the comments section of the video, netizens also shared a screenshot from the 2014 Budget reading where Minister Chan was looking down and appeared to have his eyes closed.

Recently, Minister Chan came under scrutiny after an audio clip was leaked of a closed-door session he held with Singapore Chinese Chamber of Commerce and Industry (SCCCI) members.

Referring to the hoarding of masks, he said: “If the surgical mask is not the solution, and no matter how many millions of masks we have, we will never have enough.”

Referring to the panic-buying, he asked: “Why did the run happen? You know, run on the supermarket, right? Actually ah, this one ah, I damn ashamed. You know why? Xia suay.”

“We embarrass ourselves, disgraceful, we disgrace ourselves,” Mr Chan said. /TISG