Sentence abusers who caused death of boy to be hung, netizens petition Court 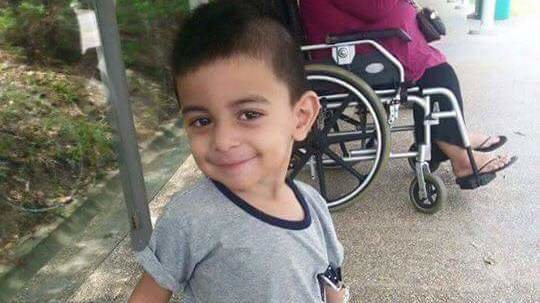 Netizens outraged by the death of the 2-year-old boy, Mohamad Danial Mohamad Nasser, have started a petition asking the Court to deal more severely with the mother and her boyfriend who abused the boy. The online petition started by an anonymous person and titled, ‘Little Daniel Mom and Zaini to be HANGED TO DEATH!’, has garnered over 1700 signatures in just a few hours since going live.
The text of the petition found here: http://chn.ge/2903FeR, reads:
“We Netcitizen would like heavy penalty like HANGED TILL DEATH for the abuse on Mohamed Daniel till death. Why would a mother kill her own son?! She carry daniel in her tummy for 9 months.. How she felt when she does the abuse?! Therefore we felt 1 count for 5 years is too light. We would like the public to stand up for little daniel and sign this petition for the abusers to be HANGED TILL DEATH!”
Facebook user Shima Matin upset by the death of Danial, posted his picture and also expressed anger at the housemates of his mother and her boyfriend who witnessed the abuse, but kept quiet.

Other netizens shared her outrage. One Facebook user, Melissa Amir, in replying to Shima Matin’s post released the pictures of people who she claimed were the parents, the boyfriend and the housemates.

In case you cannot see what Melissa Amir posted, this is it.

Another user Nurshabillah Kasim who goes by the moniker of ‘Shabby Shabby’ posted a video of the boy.

The video has been shared several thousand times and those that shared it expressed shock that the mother can be so cruel to the boy.
One of the housemates who lived with Danial’s family, Ms Puspawati Abdul Razat, 51, is wheelchair-bound after a stroke she suffered four years ago, reported The New Paper (TNP). In fact, she took pity on Danial’s family and accommodated them in her rental flat. The other housemate was Puspawati’s niece. Puspawati claimed that her disability prevented her from calling for help sooner.
The court heard on June 23 the case of how a mother and her boyfriend abused a 2-year-old boy. The boy, Mohamad Daniel Mohamad Nasser, eventually died from the injuries caused by the abuse.
The case would not have come to light if the housemate of the mother and her boyfriend had not called the ambulance after the couple could not rouse the boy on the morning of Nov 23 2015, after an entire day of abuse the day before. The boy was pronounced dead at 9.11am.
The boy’s mother Zaidah, 41, her boyfriend Zaini Jamari, 46, and Danial lived in a one room rental flat in Telok Blangah with two other housemates. Zaidah and Zaini pleaded guilty to one count each for causing grievous hurt causing death, and three counts each for child abuse.
The judge will take 26 charges against Zaidah and 18 against Zaini (both cleaners) into consideration when they are sentenced on Jul 5.
Danial suffered intense abuse from both Zaidah and Zaini two weeks before his death. On the day before he died, the court heard how the mother and her boyfriend slapped the boy multiple times when he refused to eat breakfast. When he fell to the ground and did not get up, his mother stomped him on the chest, dragged him up by his arm and made him stand in a corner.
The boy stood in the corner from 10am to 7pm. When the boy got tired from standing the whole day and leaned against a bed frame, the couple slapped the boy until he slumped to the ground and closed his eyes.
Zaini that dragged him to the kitchen and force-fed him two spoonfuls of dried chilli. He was made to stand at the corner once again. When Zahidah noticed that her son could not stand at 8.45pm, she thought he was pretending and pinched his cheeks and slapped him several times. She also complained to Zaini, who also slapped the boy and kicked him in the stomach till he fell on the floor and hit his head.
Zaini did not stop at that, he force-fed the two-year-boy dried chilli once again.
The court heard how the mother and her boyfriend showed no remorse for their crime after the boy died and that the couple returned home to watch television after being questioned.
They were also more concerned about protecting themselves, lying that the toddler had a habit of pinching himself, and that he had slipped and fallen in the toilet on the day that he died.
Autopsy on the boy revealed that the boy’s body had 40 external injuries, including a fractured rib fracture and bleeding in the brain.
Deputy Public Prosecutor Claire Poh in calling the “physical, mental and emotional abuse” of a “defenseless, voiceless” two-year-old child “horrific and inhumane”, asked the judge to impose at least a nine-year jail term and nine to 12 strokes of the cane for Zaini, and a stiffer jail term for Zaidah.Follow us on Social Media