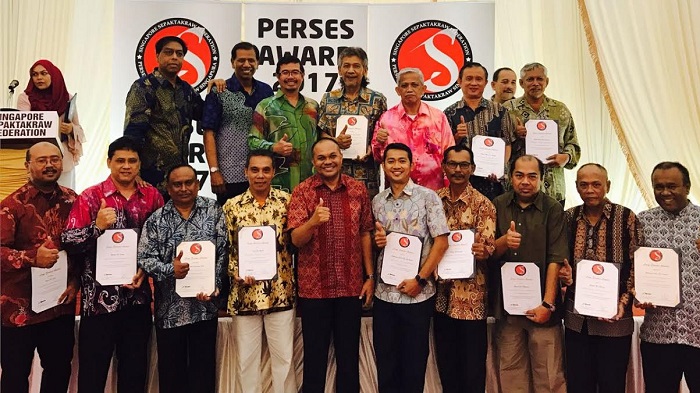 ABDUL Halim Kadir’s passion for the rattan-ball started from ‘kampong’ schooldays when he was 10, as he relished it as a sport and religion.

Over three decades, he continues to promote sepaktakraw locally and internationally, even hoping to make it a dream-come-true Olympic sport very soon.

And when Dato’ Halim, popularly known as the “Godfather”, wants to paint the town red, he does it with a stroke of a magical wand, as he extraordinarily turned a  sepaktakraw hall into a five-star ballroom, with fittings and lightings fit for royalty.

That’s exactly what PERSES (Singapore Sepaktakraw Federation) did as it celebrated its Annual Awards at the head office along Bedok North Street 2.

Rather unbelievably, I walked into a very decorative five-star hotel ballroom on Saturday. The chandelier lights, the white-gold ribboned backdrops, the air-conditioned tents and the “makan besar” of delicious kampong-styled food truly made it a red-carpet welcome.

If you ever wish for your distinguished guests to be fully immersed in your event, this is the optimum environment for any memorable event. Truly the PERSES way.

Not a sweat was raised in the formal batik-attire event as PERSES celebrated its annual awards on “home ground” in the heart-beat of a sepaktakraw hall. And nostalgia prevailed, perhaps with some tears, too, as this was the final major event before PERSES moves to its new home at the ultra-modern SportsHub later this year.

“We wanted it to be an unforgettable afternoon for the players, officials, referees, coaches, stakeholders and the VIP guests and to do it in a five-star hotel-way with aircon tentage in the midst of the sepaktakraw courts,” says Dato’ Halim .

“Few believed we could host such a magnanimous event but we wanted to make it very memorable in saluting everyone who were involved in the sport.”

That, in a nutshell, sums up his extraordinary modesty and humility. Says PERSES secretary-general Borhan Sani: “Halim is a rare breed of dedicated sports personalities who knows how to motivate in order to get the best out of everyone. The last thing on his mind is to honour himself.”

PERSES was formed in 1960 with its main objective to promote and develop sepaktakraw, locally and internationally. Now, 57 years later, Singapore plays an extraordinary leadership role in promoting the rattan-ball sport globally with over 60 countries, not only of Nusantara but in Asia, Middle East, Central Asia, Europe and America.

Dato Halim is recognised as a “rattan ball” hero of sorts. He’s now like a Speedy Gonzales-styled global sporting ambassador and plans to personally take the rattan-ball to every nook and corner of the four continents, from the Central Asian countries like Uzbekistan, Kyrgyzstan, Tajikistan and Afghanistan, and planting its seeds in the Middle East, the Americas and Europe, as well as establishing a South African base in Cape Town to spread the game in Africa.

“We can do it because it’s an easy sport to play, by both sexes, young and old, and it’s a very entertaining sport, which can garner tremendous media interest, too,” he says. “The very strong roots in Asia clearly show that it’s part of the sporting culture and heritage of the world’s biggest continent.”

Reaching out to the grassroots is a personal lifestyle trademark as Dato’ Halim has been a former senior civil servant at the Immigration Department of Singapore, who was awarded several national awards including the BBM and PBM for his rousing community work.

He’s very well connected on the political front, too, as a People’s Action Party (PAP) stalwart, last holding the post as deputy chairman for the PAP Bedok Reservoir-Punggol Branch at the Aljunied GRC. He is also a founding member of Yayasan Mendaki, a leading heartlander Malay-Muslim organisation.

“I just love the rattan ball and sepak takraw has the real potential to be a globally infectious sport, with an absolute family-viewership, from stadiums to the homes. I will never stop until I achieve my longer-term dream to make it an Olympics event.”

And he says it, holding on to the lovable rattan ball and showing the fiery spirit and heroic heart of the famed Hollywood  rocket-heeled cartoon icon, ‘Speedy Gonzales’.

The awards ceremony brought together former legends from the 1960s and 30 ex-national players were decorated for their contributions. Even two former national players who are siblings, who played in the 1990: Shamsimon Sabtu and Samon Sabtu.

Here’s the full roll of honours at PERSES Awards 2017: