A video has been circulating online of a shirtless inebriated man running across the road at what seems to be Geylang. While people passing by try to help him at first, and even get a stool for him to sit on, eventually they tire of his antics and push him down, before kicking him and hitting him.

The video, circulating on social media and whatsapp messenger shows a middle-aged Chinese man running across four lanes of oncoming traffic. Once he crossed the road, he tried to pick fights with a group of people who had gathered nearby. A man in a black t-shirt tries to help him by bringing him a stool, and even hits him with the stool but he refuses to sit down.

At one point, two Indian men try to get the man to calm down, but he hurls vulgarities at them and says, “F**k you”. Eventually another man standing nearby pushes him onto the ground rather violently and others kick his face and body.

The video ends with the man lamenting unintelligibly while on the ground.

Netizens speculate that the man is from China based on his accent. Others casually comment that the police should have been called earlier. 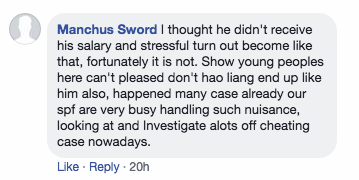