Mr Giam is one of the new MPs at Aljunied GRC while Mr Chua is one of the MPs representing Sengkang GRC. Mr Tan is MP for Hougang SMC, which has been held by the opposition party since 1991.

On Saturday, Mr Giam and Mr Tan conducted a walkabout at Hougang Central before heading to Hougang Capeview, where they linked up with Mr Chua. Although it is within the boundaries of Aljunied GRC, Hougang Capeview is an area that is at the confluence of the three WP-held wards.

Sharing that their walkabouts are a regular activity, Mr Tan said on his own Facebook page: “Every few weeks, as part of my weekend coffeeshop and estate walk for Hougang SMC, I would join Aljunied MP Gerald Giam to visit coffeeshops in neighbouring Hougang Central and Hougang Capeview in Aljunied GRC.

“We usually meet many Aljunied, Hougang and Sengkang residents having breakfast in both locations. Today’s visit was no exception. We also had Sengkang MP Chua Kheng Wee joining us at Hougang Capeview.

“We had a meaningful time together catching up with residents from our respective constituencies; it was great to catch up with many Hougang SMC residents from the nearby condos at Upper Serangoon View.”

Mr Chua added on his social media page: “Hougang Capeview, located along Upper Serangoon Road and a part of Aljunied GRC is frequented by residents in the region, including Sengkang GRC residents from across the road/river! Great to meet all of you this morning!” 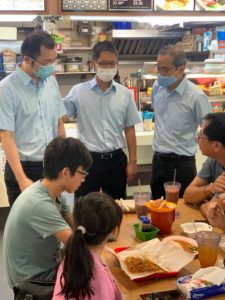 Although ex-Hougang MP Png Eng Huat, and ex-Aljunied MPs Low Thia Khiang and Chen Show Mao stepped down from electoral politics ahead of the July election, the party was re-elected with an even stronger mandate at its Aljunied-Hougang stronghold, compared to the 2015 election.

Mr Chua was elected at his first attempt in electoral politics. He was in the WP’s four-member team for the new Sengkang GRC, which included mostly fresh faces. The WP team won the GRC in a historic upset, unseating three People’s Action Party office-holders.Follow us on Social Media