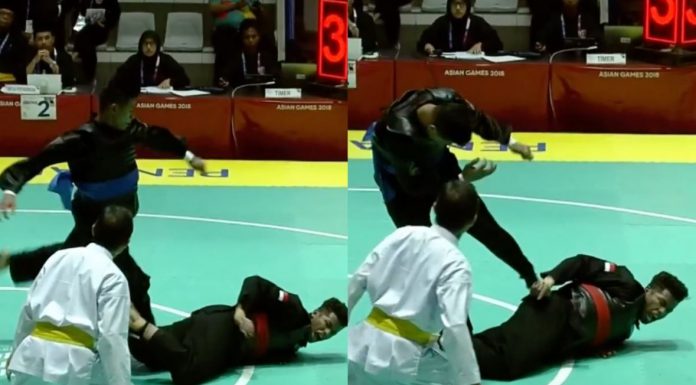 A Malaysian silat athlete sparked an uproar in the international sports community after he illegally kicked his Singaporean opponent in the back while the Singaporean was writhing on the ground. The incident occurred on Saturday, at the Asian Games in Indonesia.

A video of the incident has been circulating online. In the video, 22-year-old Singaporean silat athlete Sheik Ferdous Sheik Alauddin squaring off with his 25-year-old Malaysian counterpart Sobri Muhammad Robial in the Asian Games’ silat competition’s Class I (85-90kg) semi-final when he fell to the ground.

Suddenly and quickly, Sobri delivers a brutal kick to Ferdous’ back, causing the Singaporean to writhe in pain. This kick is not only unjustified, it is an illegal move.

The spectators at the stadium immediately boo Sobri as soon as he makes the illegal kick. Despite the commotion in the stands, another video from the match shows that Sobri appears unremorseful following the kick and even seemed confrontational to Ferdous’ coach and team-mate:

Despite Sobri’s kick, his Singaporean opponent won the match 5-0. In fact, he later told reporters that Sobri perhaps kicked him because he was frustrated that he couldn’t get close to Ferdous during the match.

Revealing that he saw Sobri’s frustrations mounting and that he anticipated the kick, Ferdous said: “I could see (my opponent’s) frustration because my game plan meant he couldn’t touch me at all. I managed to compose myself and I saw the kick coming and braced myself for it. After he kicked, I thought, ‘Ah, he actually did it… I’m just going to take this time to absorb the pain’.”

Ferdous snagged a silver medal in the pencak silat competition after beating Sobri. He lost 5-0 to Indonesia’s very own Aji Bangkit Pamungkas in the finals.

Despite his loss in the finals, members in the international sports communities have expressed their support for Ferdous and have condemned Sobri for his unsportsmanlike behaviour. One of the videos capturing the incident quickly went viral on social media after it was shared on the Indonesian Football News Facebook page, garnering at least 132,000 views so far.

Hundreds of netizens from both Singapore and Malaysia have slammed Sobri and have asked the authorities in Malaysia to ban him from the sport: