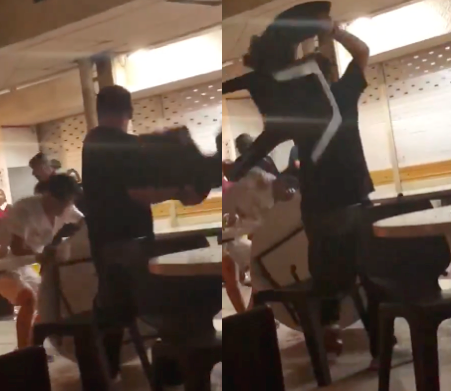 Yet another fight that broke out in a coffee shop had netizens poking fun at those involved in the brawl.

The minute-long video clip which was posted on social media on Monday (Aug 10), showed two men involved in a fight as others around them tried to pull them apart and stop it.

In the clip, a woman could also be seen in the corner being held back by another man.

The coffee shop, which had its shutters closed but lights still on also had patrons sitting outside and watching the fight.

The two men who were involved in the brawl could be seen holding white mugs and trying to smash them on each others’ heads. They also picked up wooden chairs and the more commonly found plastic variation in an attempt to hit each other with it.

Towards the end of the clip, the man in black picked up a chair and successfully hit the other man on his back with it.

Subsequently, the man in a white t-shirt can be seen even trying to lift up a table to hit the other, more elderly man with it.

In the background, a woman can be heard screaming and trying to join the fight throughout the video.

Netizens who commented on the clip were rather amused and made comments in jest.