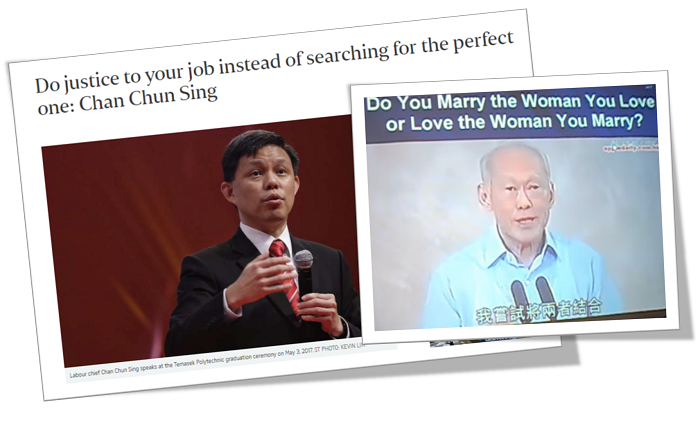 Mr Chan Chun Sing, Minister in the Prime Minister’s Office, waxed philosophical on Wednesday when speaking at the graduation ceremony at Temasek Polytechnic.

Urging students to “do justice” to the job they do rather than to look for the perfect job, Mr Chan likened this to a relationship question:  “Is it (more important) to marry the woman you love, or to love the woman you marry?”

“In this world, we have many choices in life… we are often searching for something that will give us meaning,” Mr Chan, who is also the NTUC secretary-general, told the students. “But we will often fail and then we will be disappointed.”

In other words, be adaptable and do the best in whatever you do, even as you pursue better outcomes.

This is in line with Mr Chan’s Labour Day message, where he also urged workers here, especially older ones, to be prepared to take up more than two jobs during the span of their careers.

“What we are used to in the past, one or two jobs for our entire career, now may become a series of different jobs, where career transitions become part of the norm,” Mr Chan said.

But is looking for the perfect job anathema in an ever-changing world of disruptive industries and  gig economies?

Or should your priority be to have a job, rather than to wait for a perfect one? In other words, do you marry the woman you love or love the woman you marry?

Some felt Mr Chan’s message “is a good one” but that the analogy he used “is just so wrong”.

“Trying to give meaning to what you do is as good as saying, ‘You have a boring and dead end job but hey, accept it and make the best out of it!’”, Mr Josephus Tan posted on the Straits Times’ Facebook page. “In my humble view, this makes you a productive person (at best) but definitely an unhappy person (to say the least) in the long run. That said, I think the message of, ‘Hey, let’s make the best out of any given situation’ is a good one but the analogy is just so wrong and sad at so many levels.”

Perhaps the late Mr Lee Kuan Yew, whom Mr Chan seems to have channelled, can provide the answer to the question.

“Well, I tried to match both, and I think it wasn’t a bad choice,” he said, to laughter from the audience.

“(Choo) told me later she was waiting for her Prince Charming,” Mr Lee, referring to his wife, would say in later years. “I turned up, not on a white horse, but on a bicycle with solid tyres!”

Mr Lee, who was Singapore’s founding Prime Minister, is well known and regarded for his sense of pragmatism which is seen as the vital guiding philosophy throughout his method of governance, to steer Singapore through some rough waters especially in the nation’s early years.

This pragmatic, realistic sense in life is also shared by his wife, one would imagine. After all, as Mr Lee said, he did not come galloping in on a white horse, but on a bicycle with solid tyres. And Mrs Lee didn’t mind the bicycle, apparently.

And their relationship endured, through much of Singapore’s turbulent political history, for a good 6 decades.

So, while yes one should not be too picky about the job one would want to do, one should also not stop chasing one’s dreams. We all want to be with a spouse whom we can love and be with, one who will make our life better and give meaning to the things we do.

As Mr Lee said, he too tried to do both – find the woman he’d love but also to love the woman he is with, reconciling east and west, as it were.

Singapore, after all, is a crossbreed of the two.

Mr Chan’s message is based on pragmatism, given that students today will face an even more challenging workplace by the time they graduate. The world is changing and evolving at a faster pace than ever before.

Everyone, from students to working adults and senior workers, need to constantly do better through upgrading their skills to be relevant to the economy, and to meet the global competition.

That, in gist, is the message Mr Chan was trying to get across.

It is one which Mr Lee would approve.Follow us on Social Media