Bilahari says the whole issue is politically incorrect asking, "What happened to the ‘rugged society’?"

Former Ambassador-at-Large Bilahari Kausikan has said that he expects to be attacked for his self-professed “politically incorrect” opinion on the PSLE results slips issue.

On Saturday, Bilahari, a retired diplomat shared a forum letter about the issue on his Facebook page.

Asserting that MOE has “missed the forest for the trees,” the forum letter writer said that receiving PSLE results is a momentous occasion for young pupils and that withholding the original results slip is “cruel.”

The writer added: “MOE explained why it did what it did, but surely there are other ways to persuade these defaulting parents to pay up.”

Linking the forum letter on his Facebook wall, Bilahari wrote: “This entire issue betrays the fact that we are getting effete. This is politically incorrect and I expect to be attacked. So attack. It is still effete. What happened to the ‘rugged society’?”

According to the Cambridge dictionary, the word “effete” is an adjective that describes an entity that is “weak and without much power” or an entity that is “more typical of a woman than of a man” – that is effeminate and unmasculine.

Last week, the Ministry of Education (MOE) drew backlash after revealing that it has a “long-standing practice” of withholding exam results slips from students who have unpaid school fees.

The ministry was responding to a viral Facebook post describing the plight of a needy pupil who could not collect her results because her family could not pay backlogged fees of $156.

The ministry has, however, confirmed that it provides photocopies of results slips to students with fee arrears and that these students can still progress to secondary school using the photocopies.

Asserting that the issue was “not about recovering the money,” MOE said: “MOE’s consideration stems from the underlying principle that notwithstanding the fact that the cost of education is almost entirely publicly funded, we should still play our part in paying a small fee, and it is not right to ignore that obligation, however small it is. We hope parents support us in reinforcing this message.”

While some netizens sided with MOE and blamed parents for falling behind on school payments, many asserted that children should not be penalised and humiliated for their parents’ financial circumstances.

Singaporeans criticised MOE for not extending more empathy to needy children and asserted that the practice is not fair just because it is a “long-standing” one.

Bilahari’s use of the phrase ‘rugged society’ refers to founding Prime Minister Lee Kuan Yew’s 1966 National Day speech, in which he said that that he hoped to build a “rugged society” that will enable Singapore to stand on its own two feet.

The ex-ambassador is basically saying that the PSLE results slip issue reveals that Singapore is getting weak, soft and delicate, contrary to the late Lee Kuan Yew’s vision of building a society that is hardy. 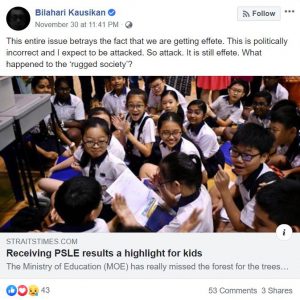